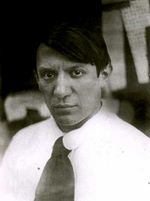 . In August 1911 the Mona Lisa vanished from the Louvre. The early stages of the investigation were more conceptual than forensic, and suspicion initially fell upon Pablo Picasso and Guillaume Apollinaire, leaders of la bande
de Picasso, which wasn’t a criminal cabal but rather a group of avant-garde artists. Picasso was hundreds of miles away from Paris when the Mona Lisa was stolen. Nevertheless, soon after returning to Paris he was arrested in his Montmartre studio and hauled away to the Palais de Justice on a bus.

Picasso had nothing to do with the theft of the Leonardo painting, but his conscience wasn’t entirely clear. He possessed a pair of Bronze Age Iberian statues stolen from the Louvre by a Belgian masquerading as a French baron. (In those days, stealing art from the Louvre was like shoplifting from Walgreen’s.) The arresting officers never noticed the stolen artworks in Picasso’s studio, but Apollinaire, who had been arrested a few days earlier, had ratted out Picasso for possessing stolen merchandise. Picasso was terrorized by a judge’s questions in open court about the stolen statues, but the artist had the presence of mind to deny any knowledge of their theft. Picasso was released under his own recognizance and promptly incorporated the stolen Louvre statues into Les Demoiselles d’Avignon.

For his crime Picasso spent a month in a constant state of paranoia as he feared being arrested again. Apollinaire spent two miserable days in prison. For years afterward he grumbled about being the only person in France arrested for the theft of the Mona Lisa. Two years after it vanished from the Louvre, the stolen painting turned up in a Florence apartment only blocks away from where Lisa Gherardini, the subject of the painting, was conceived.