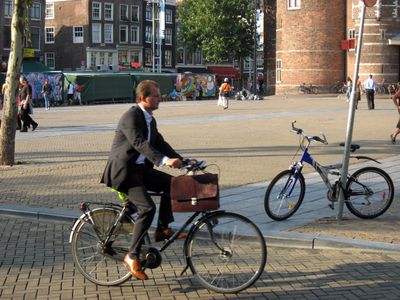 Want to commute to work or run weekend errands on a bicycle without looking like a sweaty, beady-eyed bike messenger? Want to save the planet and your sport coat? Get a Dutch bike.

The New York Times has a set of features on urban cycling placed, strategically, in the Fashion section. The purpose of the articles is to demonstrate that it's possible to commute by bicycle while still wearing nice clothes. The Dutch log more miles on bicycles than they do in cars, and they ride while wearing suits and high heels. Unlike the Lycra-clad mad men racing down Sheridan Avenue on their Cervelos, the Dutch regard bicycles as workaday things. They ride pragmatic bicycles equipped with fenders, chain guards, swept-back handlebars, and racks. Men ride the same bikes as women–sometimes even step-throughs–and they don't look or feel twee. Because their bikes enforce an upright posture, it's difficult to get going very fast, so you don't sweat as much. Modulated speeds also mean the Dutch don't wear helmets.

The appeal of the Dutch bicycle lies less in the bike itself than in an attitude about bicycling: just get on the bike and go someplace. No fussing with clothing, no tying everything down, no strapping on a big helmet, no fear of grievous injury. I commute on a Bianchi Boardwalk, a hybrid bike in the American style–slightly hunched like a man in a fox hole–while wearing a sport coat and khakis or jeans. Invariably I ride like I'm in a race, even when I'm not in a hurry. Consequently, I arrive sweating and rumpled and it takes a few moments for my body and mind to slow down to walking pace again.

And yet, I can't picture myself riding upright in the Dutch style, helmetless with my pant legs flapping as I ride along the suburban streets. The low handlebars on my Bianchi enforce a head-forward, aggressive posture that can get uncomfortable after a while, but I also feel less conspicuous, less on display. I keep a wary eye on the car culture around me.

To fully adapt the sensible Dutch approach to bicycling, we would have to develop some sort of bicyle culture, and if that's going to happen in the US, non-cyclists will have to lead the way. The most interesting comment in the NYT article came from George Bliss, a Pratt Institute faculty member and owner of a West Village vintage bike shop, the Hub Station.

“I use to think that car culture was the problem, but now I think it’s
bike culture,” he said. By that he meant that the discourse about city
biking is dominated by cycling zealots who don’t have the desire, or
the skill, to attract people who don’t see themselves as cyclists, just
as people who ride a bike to work.