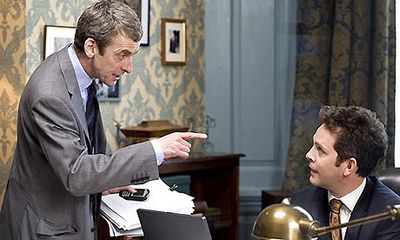 Armando Iannucci’s In the Loop, which will appear Monday, April 27 at the Tribeca Film Festival, went into general release in Britain last weekend. The blistering political satire, based on a BBC series, didn’t do as well as I Love You, Man or Crank 2: High Voltage among British film viewers, but it held its own, grossing £467,000 on its opening weekend. (By comparison, I Love You, Man grossed £1.12m the same weekend.) The commercial success of In the Loop is a good sign not only for the film’s prospects in the US, but also for British satire, which has had its ups and downs lately.

On both sides of the Atlantic In the Loop garnered a lot of positive publicity while in production. In the US the film attracted attention because it stars James Gandolfini as a leeringly oafish American general. Meanwhile, in the UK the publicity centered around the television show, which had a cult following–meaning, in TV terms, that most people saw it once and never switched it on again.

In the Loop is smart and funny, but it may have peaked too early. Its premise–that the Anglo-American alliance is run by venal idiots–is very 2005. It’s cinéma vérité style is too immediate for events that happened in the receding past. For American audiences there’s also the language barrier posed by foul-tempered Scots ranting in impenetrable burrs. For filmgoers, Iannucci’s overly active camera is more suitable for television than multiplex widescreens. And finally, James Gandolfini looked more comfortable in New Jersey silks than in chest medals.

Nevertheless, we haven’t yet had a really sharp satire about the Bush-capades, and In the Loop is our best bet yet.