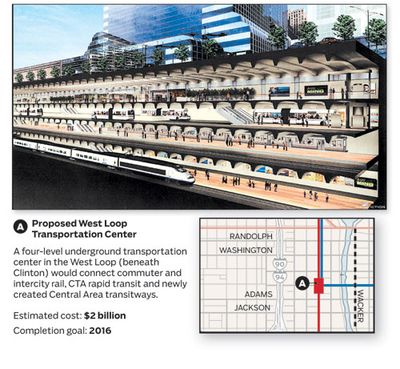 Today Chicago unveiled an ambitious plan to revamp its transportation systems. Most of the $15.5 billion would be spent in downtown Chicago, and a good portion would be spent on tying together the West Loop transportation hubs, Union Station and the Ogilvie Transportation Center in particular. Two other major additions would be a new subway running from Cermak to the North/Clybourn intersection and a high-speed rail line to replace the current Blue Line train, which zips out to O’Hare at trolley car speeds. There are few green baubles here and there–a landscape cap over the Kennedy Expressway between Monroe and Washington Streets, improving the River Walk–but mostly the plan focuses on transportation.

Chicago’s transportation system was laid out in the 1950s and was designed to shuttle suburbanites back and forth between their bedroom communities and Loop office buildings–while hustling by the decayed neighborhoods ringing downtown. This new plan recognizes that the neighborhoods surrounding the main business district are densely populated with affluent white collar workers. The plan calls for much more extensive and efficient connections between the Loop and its immediately environs, although I notice not much will be done in my old neighborhood, River West, where residents will continue to stare forlornly down Grand Avenue waiting for a bus.

The new plans fails, however, to do much about the main flaw in the city’s transportation layout: connecting the West Loop transportation systems to the lakefront. The International Olympic Committee citing this flaw as a significant shortcoming in the city’s bid for the 2016 Olympics. Making people walk an extra six blocks or so would be a good thing if they didn’t have to pass by empty skyscrapers and shuttered restaurants on a Saturday morning. If the Loop had better street life during the weekends, we wouldn’t need any expensive transportation systems allowing people to continue bypassing urban life.