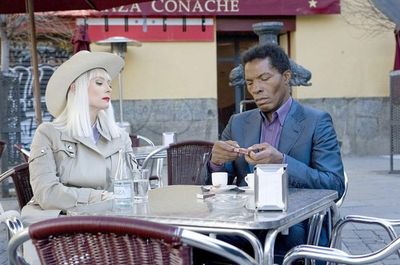 I remember the first time I ever heard of Jim Jarmusch. Roger Ebert and Gene Siskel were chortling in wonder over Stranger than Paradise. The film was like nothing else I’d seen in a recent American film—and, apparently, like nothing else Ebert and Siskel had seen for a long time, either. Jarmusch was the Antonioni of the Bowery, combining European filmic modernism, New York minimalism, and highly adventurous tastes in music. He quickly became the archetype of New York cool, even though he’s actually from Akron, Ohio and only two of his films are set entirely in the city, Permanent Vacation and Ghost Dog.

So it’s fitting that Jarmusch is the invited guest of Film Comment Selects and the Young Friends of Film. On April 30 at 7 PM at the Walter Reade Theater there will be a screening of his latest film, The Limits of Control. After the screening Jarmusch will speak with Film Comment editor Gavin Smith.

But if Jarmusch has always been the epitome of New York cool, he’s not always enjoyed critical or popular favor in his adopted hometown. As early as Mystery Train (1989) critics were detecting some strain in Jarmusch’s hipster poses. After Night On Earth (1992) Jonathan Rosenbaum, an early and enthusiastic supporter, turned on Jarmusch, accusing him of repeating himself. His critical favor bottomed out with Dead Man (1995). Jarmusch tiptoed a bit toward conventional film structure with Broken Flowers (2005), but The Limits of Control represents a return to Jarmusch’s 1980s continental style, but this time with Tilda Swinton and Bill Murray returning from Broken Flowers for good luck. (That’s Swinton in the Tarantino get-up in the photo above, with Isaach De Bankolé, who plays the lead in Limits.)

The Limits of Control goes into general US release on Friday, May 1.