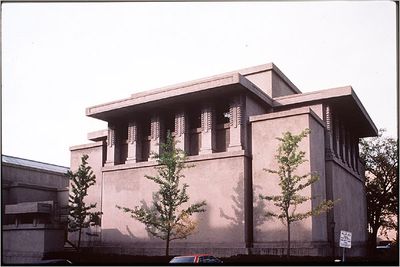 The National Trust for Historic Preservation named Frank Lloyd Wright’s Unity Temple in Oak Park, Illinois, to its 2009 list of America’s 11 Most Endangered Historic Places. I was married in the Unity Temple in 2003. Despite the peeling paint and lack of air conditioning, it was a serene, sublime space—one of the memorable interior spaces I’ve ever been in. We were told at the time that a major restoration project was about to begin, but apparently the structural problems were worse than originally feared, because the building requires a multi-million-dollar rescue effort, a capital investment that Unity Temple’s community of dedicated supporters cannot afford.

The Unity Temple features several design innovations that, over the years, have made the building a challenge to maintain. It was one of the earliest public buildings to feature exposed concrete. The experimental concrete design did not call for expansion joints, there is extensive cracking. To preserve the integrity of its geometric design, Wright created 16 separate flat roofs. Instead of using gutters, he designed an internal drainage system with hidden downspouts housed inside the four main interior columns of the temple.  The system was undersized and essentially inaccessible, and to this day water continually overflows the drains and permeates the concrete roof slabs. Heavy rains in September 2008 caused a large chunk of plaster and concrete to fall from the sanctuary ceiling.

Even some of the more conventional, or less radical, elements in the building have decayed. The distinctive art glass windows, created during the peak of Wright’s Prairie School period, are cracked, bowed and in need of professional conservation. Much of the beautifully modulated wood banding throughout the building is in need of refinishing, plastered and painted surfaces require expensive restoration, and the original Magnesite floors are cracked from heaving and require extensive repairs.

The Unity Temple Restoration Foundation estimates that it needs $4 to $6 million immediately to stabilize the structure and complete critical concrete repairs. They also require $1.5 to $2 million to install an interior climate-control system, the need for which I can certainly attest to after spending a sweltering August afternoon there with my bride and sweating family. The cost of the complete project, including interior restoration, is estimated at $20 to $25 million.