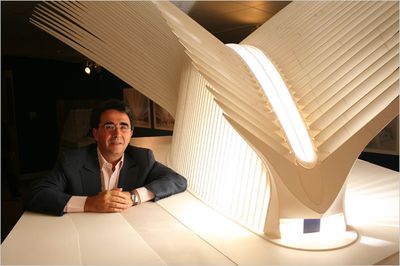 Nicolai Ouroussoff files a harsh assessment of Santiago Calatrava’s updated design for the transportation hub for ground zero. He writes, “Mr. Calatrava remains unable to overcome the project’s fatal flaw: the striking incongruity between the extravagance of the architecture and the limited purpose it serves. The result is a monument to the creative ego that celebrates Mr. Calatrava’s engineering prowess but little else.” The revised design is still spectacular, but “hollow at its core.”

Train stations have humble tasks: get people from the street to the train and back again. Suburban and small town train stations accomplish this largely by staying out of the way. Only big city train stations try to control the experience. Ideally, they do so in a symbolically meaningful way through their soaring central halls, which try to elevate the experience of travel. The great train station halls are zones of multiple possibilities, any one of which can change you. The spaces are also meant to make you forget the dangers and tedium of travel.

Ouroussoff objects to the way Calatrava’s revised design routes commuters through a cramped commercial area rather than through the glass dome itself, through what Rem Koolhaas has termed junk space, that is, space that exists only to try to sell you something. Calatrava’s great hall is space is uplifting, but peripheral to the general business of the hub. The wing-like structure exists primarily to celebrate the structural genius of its designer, according to Ouroussoff.

The experience of passing through the ground zero transportation hub, in other words, will be a lot like trudging through any number of major urban train stations. Chicago’s Union Station, New York’s Pennsylvania Station, Paris’s Gare du Nord are all dark, confusing labyrinths that convey nothing of the grandeur of the cities to which they welcome us. The worst experience has to be the Oglivie Transportation Center in downtown Chicago. Commuters are dumped unceremoniously into the Citicorp building, reminding you every day of your true masters: your creditors. In my travels only Philadelphia’s 30th Street Station directs travelers through its main hall. Of course, none of these stations cost $3.2 billion, and it’s not unreasonable to expect more of Calatrava.

There’s always been a little poignant that the most distinguished piece of architecture in the ground zero project was devoted to the utilitarian task of shuttling people to and from New Jersey. Calatrava’s winged PATH station, it is important to remember, will be part of a set of buildings, some of which promise to be good, but only some of them. It’s possible that when all the buildings at the site are complete that our eyes will be drawn to the winged structure in the corner. That will be worth $3.2 billion of someone else’s money.