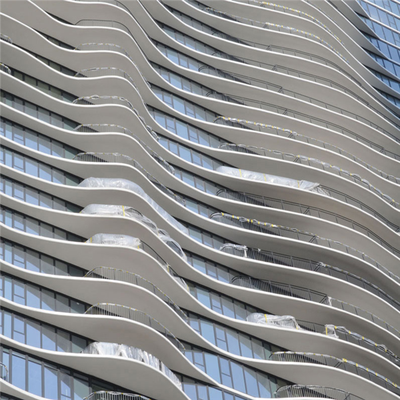 With Renzo Piano’s Modern Wing at the Art Institute of Chicago opening to the public this weekend, and  Jeanne Gang’s long-awaited 82-story Aqua tower (above) nearing completion, one might forget for a moment that new construction in the city has nearly ground to a halt. Among the high-profile downtown projects on indefinite hold are a tower for Wolf Point, the Waterview Tower, and the Chicago Spire, which was an implausible project even during the building boom.

Nevertheless, WBEZ, Chicago’s public radio station, wonders if Chicago’s tradition of great architecture has been revived. The story is upbeat, but oversimplified. For every triumph there’s a major setback: Piano’s Modern Wing is terrific, but the city has decided to tear up a set of Walter Gropius buildings. There’s lots of talk around town about a new urbanism, but other than some tinkering with the rail systems, no concrete plans have emerged, and there’s no money available anyway. Chicago aspires to be a green technology center, but its technology sector, green or otherwise, is nowhere near as innovative as other tech centers in the country.

Still, there are some efforts to rethink urban planning in Chicago. The Congress for New Urbanism and Chicago Metropolis 2020 are just two of the organizations dedicated to pointing this tradition-bound city toward new planning ideas. Others are doing their part to make the city a greener, more humane place. The Dutch Bike Company on Armitage Avenue is creating a car-free, or at least greatly car-reduced, Chicago one sturdy Dutch bike at a time.