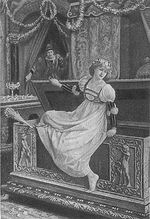 In her new book, Fairy Tales: A New History

, Ruth B. Bottigheimer argues that fairy tales were not originally folk tales transmitted orally then later written down by folklorists. She writes,

It has been said so often that the folk invented and disseminated
fairy tales that this assumption has become an unquestioned
proposition. It may therefore surprise readers that folk invention and
transmission of fairy tales has no basis in verifiable fact. Literary analysis
undermines it, literary history rejects it, social history repudiates
it, and publishing history (whether of manuscripts or of books)
contradicts it.

She claims, for instance, that the Cinderella story originated in Venice in the mid-sixteenth century. The rags-to-riches tale became popular in the commercial city when it was mired in an economic slump. The “rise” genre was a literary (i.e., written) genre created by Straparola, author of the collection Le piacevoli notti (Pleasant Nights [c. 1550]).

Bottigheimer’s claims have upset many folklorists because she’s challenged one of the field’s most fundamental tenets. Others, however, have sided with Bottigheimer, arguing that the pre-literate origins of fairy tales were invented by Victorian folklorists obsessed with the authenticity of primary oral cultures. Still others point out that it’s misleading to separate out fairy tales from the wide variety of folk tales. Vladimir Propp, in his seminal Morphology of the Folktale

, recognized seven different types of folk tales, one of which was the “pure” fairy tale (Reine Zaubermarchen). But even Propp, an exacting scholar, expressed frustration at telling the different forms apart and tracing their individual histories.

This dispute is more than an obscure scholarly dustup. The reason why Cinderella can morph into so many different versions is that the story has no origin. There’s no definitive version of the Cinderella story. It’s pure sujet. The Cinderella character isn’t burdened with the textual specificity of a Shakespeare or a Jane Austen heroine, so it’s easier to identify with her, and more importantly, to re-define her imaginatively. But if Bottigheimer is correct that Straparola’s collection was the origin of Cinderella, the story becomes even more vulnerable to ideological and historicist critiques, that the story has its origins in a time of economic uncertainty and, potentially, social unrest. The Fairy Godmother’s wand waves away all kinds of complications in the political economy.

Then again, maybe not. Garry Marshall’s film Pretty Woman (1990) came perilously close to revealing the Cinderella story’s crass economic origins, and it was an immense hit among college-educated women.