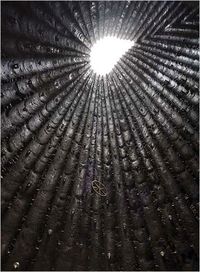 The selection of Peter Zumthor as the winner of this year’s Pritzker Prize continues to create controversy. A number of critics have denounced the “Swiss hermit” for his isolation from the pressing political issues architects currently face. Zumthor’s monkish existence troubled me as well, but, to be fair, we probably wouldn’t be so concerned about Zumthor’s isolation if the building boom were still on.

At Archidose John Hill defends Zumthor against charges of being apolitical. Hill argues that architects are always already political in that they have to contend with government agencies, developers, and landowners in every project. “Architectural projects in democratic societies can be seen as the utmost expression of politics, in that the conflicting interrelationships are played out in space, with the help of money, power and (free) speech,” he writes. Zumthor is political because “he is closer to being an activist than an ignoramus, because he is very selective of the projects he takes, he works on projects for an amount of time much longer than most architects, and he creates buildings at odds with most developer-driven architectural production today.”

, the architect presents himself as a Proustian sensualist, recalling his childhood memories of opening the gate to his aunt’s garden. “That door handle still seems to me like a special sign of entry into a world of different moods and smells.” He then goes on to cite Joseph Bueys and the Arte Povera group as major influences for “the precise and sensuous way they use materials.”

This would seem to be an odd takeaway from artists known first and foremost for their political artworks. But in The Politics of Aesthetics

Jacques Rancière defines the aesthetic as the political rearrangement of the possibilities of experience. The aesthetic

is a delimitation of spaces and times, of the visible and the invisible, of speech and noise, that simultaneously determines the place and the stakes of politics as a form of experience. Politics revolves around what is seen and what can be said about it, around who has the ability to see and the talent to speak, around the properties of spaces and the possibilities of time.

Zumthor’s artisanal approach to building re-acquaints public architecture with sensual memories, what Zumthor calls “architectural atmospheres and images.” This is, I think, a legitimate political stance, especially because it offers an alternative to the highly visual quality of most high-end architecture today. Frank Gehry is a wonderful designer, but compared to Zumthor, his buildings are remote; they’re not to be touched. The way Zumthor thinks about architecture couldn’t be more different than Gehry. The Swiss architect recalls the doors in his aunt’s house, the way that they “closed in such different ways, one replete and dignified, another with a thin, cheap clatter, others hard, implacable, and intimidating . . .” (ellipses in original). How different from the stories of Daniel Libeskind agonizing for weeks over the choice of a door handle. Zumthor wants to bring the experiences of things not designed into the most refined designs imaginable.

The only question I would have about Zumthor’s political architecture is this: By introducing the complexity of individual sensual experience into public architecture, is Zumthor opening up the possibility of a shared experience—we’re now free to invoke the feel of humble, commonplace things around the house while we’re in public space—or are his buildings mainly objects for individual contemplation cut off from any kind of present day social experience?