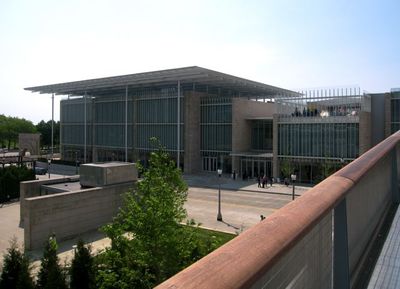 You don’t enter the Art Institute’s new Modern Wing so much as board it. A bridge reaches deep into Millennium Park, with its corporate-sponsored populism, then carries you into an elegant modernist space built by traditional art patronage. The juxtaposition of these two cultural modes of art consumption is reflected in the deep ambivalence, even confusion, of the first place you land upon within new building. The bridge delivers you to a roof deck offering a spectacular view of the Frank Gehry-designed Pritzker Pavilion, the AT&T Plaza with Anish Kapoor’’s Cloud Gate sculpture, and the Chicago skyline. The deck offers some Scott Burton sculptures which are essentially stone furniture. But the deck is also a white-tablecloth dining space, with a crew of black-clad waitresses hovering about to make sure no one touches the glassware. The view and the Burton sculptures are inviting, but one fears the waitresses are going to shoo everyone away.

The next problem is finding your way to the art. The elevator seems like it would be the most direct route, but it’s crowded with people in wheelchairs. You finally come upon a staircase that seems to be your only way of getting off the roof deck and into the galleries. Sure enough, after several flights you find yourself in front of the ticket office for the Modern Wing. You enter the paid section of the museum in the Griffin Court, a space that manages to be serene and beautiful despite being crowded (we all marched in free that day) and rather narrow. Natural light filters down from the high ceiling. The stairways and gallery entrances are visible along the north wall—a machine for consuming art. You have to pause here for a moment: you’re now fully integrated into the Modern Wing and in the hands of its architect, Renzo Piano. The marvelous details aren’t yet visible, but Piano’s command of proportion and his Cartesian rigor are immediately apparent.

Still a little uncertain how you arrived in the museum, you mount the stairs to the third floor galleries, dedicated to European Modernism from 1900 to 1950. On a sunny Friday all of the lights are off. The galleries are lit solely by sunlight filtering in through the glass roof. Even at noon the light isn’t optimal for viewing artwork, but the subdued light underscored the restless pessimism of art from that period. I will get to the artwork in the next post, but now you can finally appreciate the Piano’s meticulous details. The slender structural elements are joined together with masonic precision. There’s glass everywhere, and yet none of it is bare. White shades are pulled taunt and unusually well integrated into the window frames. The effect is one of unperturbed refinement.

Because it lacks the transparent roof of the third floor, the second floor is less captivating, but still a (mostly) excellent space. The second floor houses American and European contemporary art after 1945. The people to painting ratio shifts in favor of the former, however, and some familiar museum irritants start to intrude upon your experience. I was pressed up against a Jackson Pollack by the crowd, when I would have rather of stood further away. A guy who went through the entire museum wearing his bike helmet blocked my view of a large Mark Rothko. Even after some practice, it’s still not intuitively clear whether you should pull or push upon a door. (One embarrassing moment: I thought I was locked out of the men’s room until another guy pushed open the door and walked right in.)

Piano tucked away the commercial enterprises—the bookstore and the coffee shop—into the museum’s remote corners, which is appreciated. Unfortunately, the second floor Architecture and Design Gallery is also tucked into a corner, and a dark and warm one at that. The A & D gallery has none of Piano’s distinctive touches, such as windows. It’s surprisingly drab. Worse, it doesn’t flow. After reaching the end of the gallery you have to double back and retrace your steps to exit. The alleviate the boxcar-like feeling of the gallery Piano cut open some of the walls and placed display platforms in the gaps. It would seem that you could cut between the platforms and circle back, but there’s a guard there whose only job is to forbid people from slipping through. On a practical and metaphorical level, the experience is a dead end. 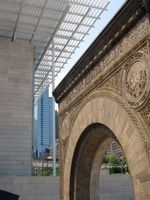 The unfortunate Architecture and Design gallery aside, the Modern Wing is exactly what a museum devoted to modern art should be. Piano’s classicism may seem slightly out of place, but some of the art is over a century old now and starting to achieve classical status. There are awkward spaces—the roof deck, the baby changing tables in the restrooms—but overall the building is masterful. Piano’s design has been criticized for lacking any truly distinctive features, but that’s what is so modernist about it. The Modern Wing has to be taken as a whole, like a Mies design.

This is a very sharp-edged design. There isn’t a single curve in the place. And yet it feels inviting without ever pandering. It’s a remarkably focused building, offering its own distinctive experience while mediating between the carnivalesque architecture of Millennium Park and the Gibson Girl dowdiness of the Art Institute’s main building.

In the next post I will look more closely at the art within the Modern Wing.