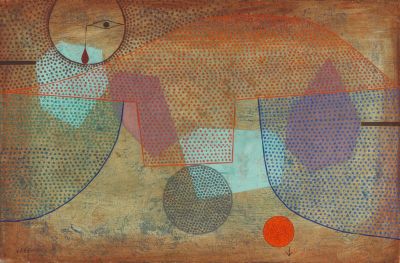 Renzo Piano’s new Modern Wing (see it here) gave the curators at the Art Institute of Chicago 264,000 square feet of extra space to play around with, so they’ve filled it with recently acquired art and some paintings they previously didn’t have room to exhibit. The curators are still toying with the space, trying to figure out which paintings should go where. Mostly the curators have it right.

The elegant third floor of the Modern Wing houses European Modernism from 1900-1950, with American art from this period sequestered in another wing of the museum. Historically for the Art Institute this period represents a tricky jumping off point. The museum is best known for its Impressionist collection. From there the museum fast forwards a bit, zipping through its Picassos, the inescapable Nighthawks, and the AIC’s blockbuster Jackson Pollock, Greyed Rainbow (1953). But with the new space, it can slow down and present a more studied view of European High Modernism.

The third floor collection starts off confidently on familiar ground with a display of Fauvist paintings from the usual suspects along with some surprises, including a Fauvist/Cubist fusion painting by Georges Braque, Little Harbor in Normandy (1909).  The story takes an abrupt turn with Matisse’s Bathers by a River, first painted as a Fauvist fantasy in 1909-10, then repainted in 1913 as Matisse’s response to Les Demoiselles d’Avignon, then repainted again in 1917. The full force of the artistic crisis in Teens art is exemplified by this single monumental painting: one third Fauvist, one third Cubist, one third chronic despair. But then—maybe I wasn’t proceeding through the gallery correctly—you move on and there’s Picasso back in his Blue Period funk with The Old Guitarist (1903-04).

Beyond the first gallery it becomes clear that while the AIC has a terrific collection of Modernist art, it’s not MoMA. The AIC doesn’t try to present a comprehensive display of Modernism. The AIC’s collection of German Modernism is limited, pretty much, to a pair of Beckmanns: his Reclining Nude (1929), a Cezanne/Matisse mashup painted during a visit to Paris, and a self portrait of the artist glowering in a tux, Beckmann’s last painting before fleeing Nazi Germany. There’s not a single genuine Egon Schiele on display, which is the biggest disappointment of the Modern Wing.  (There are some significant copies, which I’ll get to in the next post on the second floor of the Modern Wing.) It’s left to a handful of Lyonel Feininger paintings (Carnival in Arcueil [1911] in particular) to give a hint of the louche appeal of German Modernism.

What the Modern Wing offers, however, is a tour through some of the lesser known, but still fascinating, tributaries of Modernism. We get to see major artists during their formative years. For instance, there’s an astonishing landscape from Piet Mondrian, Farm Near Duivendrecht (1916). We get to see startling works from unfamiliar artists—in some cases, so unfamiliar they’re not even in the AIC’s online catalog. Nathalija Gontcharov’s Klimt-like Spanish Dancer (1916) is really a painting of a dress, but it’s rendered in such vivid detail that her painting jumps out from the crowd of smoky abstractions of male artists in the gallery.

The third floor galleries offer new insights into familiar Modernists. Three or four examples were enough to convince me that Man Ray was a crummy painter. I saw two terrific Klee paintings from 1929-30. I’ve always liked Klee, but I liked Fleeing Ghost (1929) and Sunset (1930) even more than his later work.  I finally found a Juan Gris painting I liked. Previously whenever I looked at a Gris painting all I ever saw was teal, but The Checkerboard (1915) had greens and browns that existed in nature, and not just in the painter’s head.

Curatorial design re-asserts itself midway through the third floor with a gallery labeled “A Call to Order.” A quick glance around this gallery of post-World War I art and the point is made. However, one gallery later the order quickly dissolves into Surrealism, one of the few Modernist schools AIC has in abundance. The Surrealist collection in the Modern Wing is very good, by which I mean it has not a single Salvador Dali.  Everyone else is there, including, of all people, Le Corbusier. His untitled painting from 1932 is a credible Surrealist pastiche, hung, I noticed, without comment. Next to it was his Purist Still Life Filled with Space (1924), which the curators explained thoroughly. For me the most intriguing Surrealist work on display was a multi-panel wood screen by Yves Tanguy. The screen was supposed to be the entry point into a dream world, but I was transfixed by the thingness of the screen itself—its rough wood, its unoiled hinges. That’s how Surrealism is supposed to work.

The Modern Wing’s European Modernism collection concludes thematically and spatially with Francis Bacon’s Figure with Meat (1954). It’s in an anteroom by itself. A bench has been placed there so that you can contemplate Bacon’s mid-century existential scream. However, the room has at least six closet doors in it, plus two sets of glass doors with egress to the hallway. The painting is haunting, but its spell is broken by proliferation of closed doors and people bumping up against the glass doors as they try to figure out whether they should push or pull.

I hope that the curators will find a better solution to the placement of the Bacon. Generally, however, they’ve done an excellent job of presenting European Modernism. The third floor is such an elegant space that it’s hard to go wrong. The second floor, however, is a very different experience.