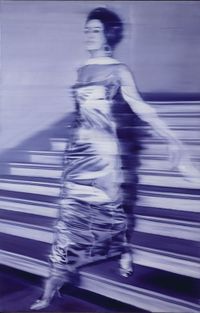 Last week I spent an hour and a half on the third floor of the Art Institute of Chicago’s new Modern Wing (more on that here), where European Modernism from 1900-1950 is exhibited. By the time I made it down to the second floor it was just after noon, and the place was packed. One minute I stood with my nose pressed against Jackson Pollack’s Greyed Rainbow, and the next minute my view of a large Mark Rothko painting was blocked by a guy who went through the entire museum wearing his bike helmet. However, getting jostled by the crowds led me to notice something I might not have noticed otherwise: after World War II artists painted a lot of really big paintings. The lesson I got from the second floor was that art’s relation to cultural institutions changed after High Modernism.

The second floor is split into two main galleries, Contemporary Art 1945-1960 and Contemporary Art after 1960. The 1945-60 gallery is particularly small, just one long, narrow room. Fortunately, the paintings are huge. The post-1960 gallery has even more elephantine works. These paintings were made for gallery spaces. Greyed Rainbow commands an entire wall, while upstairs important Braques and Matisses are lined up together, each a leaflet for an entire artistic revolution. They’re like a hundred rabbit punches.

Most Modernist artworks faced uncertain exhibition fates. René Magritte was exasperated by the patron who owned his Time Transfixed (1938). Magritte wanted the painting hung on a stairway so that the train would appear to jab people. The owner hung the painting over his fireplace to Magritte’s eternal frustation. The blockbuster Les Demoiselles d’Avignon sat in a corner of the artist’s studio for nine years before the public got its first glimpse of Picasso’s masterwork, and it wasn’t on permanent public display until 1939.

Pollock and de Kooning knew their work would find its way to a big wall. Their successors worked under the same assumption. A lot of impressive work resulted. However, this means that in a museum context every painting thinks it’s Rocky Marciano and it can knock you out in one punch. One can grant Franz Kline his big canvases, but there are more than a few works that are bigger than they need to be. Hanne Darboven’s Seven Panels and Index (1973) is a virtuoso display of graphomania, but the way it’s mounted in the Modern Wing it’s hard to see the top panels very clearly. In isolation the vastness of Darboven’s work would be meaningful in itself, but less so when every other work in the room is huge, too. Cy Twombley’s paintings not only want to take up a lot of space, they seem to want to be space. Largeness isn’t always convincing.

Perhaps the size of the contemporary paintings led the curators to change their pedagogical approach to post-war art. Upstairs in the Modernism galleries selected paintings have individual explanatory notes mounted next to them. Downstairs a brief essay on an artist’s entire career is printed high up on a wall. This approach makes sense for artists whose paintings tend to look the same, but for a more protean artist like Gerhard Richter one can drift through his gallery and wonder what holds these disparate works together.

Not all the gestures on the second floor are so broad. The curators stage some interesting confrontations between individual artworks. Margherita Manzelli’s enigmatic Dopo la fine (2008; not available in the AIC’s online catalog) gazes steadily at Lucian Freud’s blunt Sunny Morning–Eight Legs (1997). Too bad periodization prevents a call out from the Manzelli to Nathalija Gontcharov’s Spanish Dancer (1916), located upstairs.

After the disappointment of not seeing any Egon Schiele drawings on the third floor, they appear unexpectedly on the second. One problem, though: they’re not drawn by Schiele. Sherrie Levine replicated 18 different drawings by Schiele, complete with gauche smears. Levine understands Schiele’s line, but her figures lack the haunted glamor of Schiele’s self-portraits and, therefore, a critical element in Schiele’s unique form of narcissicism. Levine’s faces look like male models; they’re too clear-eyed, too well-fed to be fully convincing evocations of the Austrian artist’s self-regard. Levine’s images may refer to male narcissism, but not necessarily Schiele’s.

Because it doesn’t have any skylights, the second floor lacks the third floor’s architectural panache. Yet there’s one second floor gallery that best captures the spirit and intent of the Modern Wing.  The north wall of the Elliott Room has floor-to-ceiling windows looking out upon the Chicago skyline. Exhibited in the room are a set of large canvases painted in simple white.  At first glance, Robert Ryman’s Charter Series paintings seem too pale, too insubstantial to stand next to the skyline, but they form a liminal zone that thematizes the entire Modern Wing. The gallery is among the last in the Modern Wing, and by now it’s clear that Renzo Piano has been framing the Chicago skyline as an artwork in its own right.