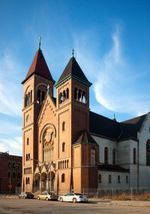 In the passions stirred by building preservation controversies it's not always clear why a particular building should be preserved. In some cases people want to preserve a building simply because it's old. In other cases one characteristic of the building overrides all other considerations. The controversy over the Mies van der Rohe's IIT building is a recent example. Some buildings people want around for sentimental reasons, even if they can't think of any current use for it.

St. Boniface Church in Chicago's River West neighborhood (see map) would seem to fall into the last category. Mass hasn't been celebrated in the church since 1990, when the Catholic church confiscated the church's prized relic, a piece of St. Ann's skull, and shut the doors for good. The attached
Catholic school and two convent buildings have already been demolished. The church and rectory need millions of dollars of work just to stop them further decay. St. Boniface's current owner, the Archdiocese of Chicago, wants to
demolish the building but retain ownership of the property, which is
located in a gentrifying neighborhood just west of downtown. Local
concerned citizens, former parishioners along with neighborhood residents, have been campaigning to preserve the church
since 1999, when the church gave up on the St. Boniface complex and
announced plans to raze the buildings and create a green space. Preservation Chicago named St. Boniface one of its seven most endangered buildings for 2009.

Why all the fuss about a neighborhood Catholic church when there are still plenty of distinguished, and still active, churches in the city? The church's story is typical of a lot of endangered buildings across the country: it's not associated with a major historical event, nor was it designed by an internationally famous architect. Its structure is so deteriorated that it would be much cheaper to simply build a new replacement. Time has passed it by.

St. Boniface was completed in 1904 to serve what was then a largely German Catholic congregation. The church was designed by Henry J. Schlacks, an architect familiar to architectural historians but hardly anyone else. It's a stately Romanesque church that takes up most of the northern end of a rather unlovely park. I used to live in the neighborhood and I would walk my dog in the park. The church was a striking sight. Despite its relatively modest size, the building is perfectly balanced between grace and monumentality. Its strong vertical lines and clean facade departs from typical ecclesiastical architecture from the period, which tends toward the florid and the ponderous. Even in the building's neglected state it's clear that Schlacks was a skilled architect. 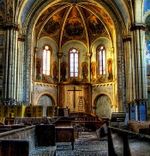 There are two proposed uses for the property: A Coptic congregation has expressed interest in rehabilitating the church, but given its advanced state of decay, that plan seems impractical.  In 2005 a real estate developer expressed an interest in building a high rise condo building. With the city drowning in unsold condo units, those plans have probably been shelved. The city has offered to swap a property with the archdiocese, and negotiations are ongoing. Meanwhile, the archdiocese ripped out all the windows and submitted a demolition request to take care of the rest.

St. Boniface is never going to be a Catholic church again. It's not clear what the city would do with the property even if it gains ownership. At this point the issue is a problem of urban planning: how will the neighborhood evolve? Into a cluster of high rise condos for transient Loop office workers? Into a collection of phony Irish bars and generic low-rise rental units? Traces of its origins as a German (and later Italian) neighborhood are too fragile to stamp a unique identity on the area. The neighborhood is marooned by the Kennedy Expressway, which effectively severs it from downtown and the River North neighborhood just to the east.

Can a large church anchor a vital twenty-first century urban neighborhood? With its clean lines and perfect proportions, St. Boniface could provide an aesthetic and historical center to the neighborhood, especially if Eckhart Park continues to improve. It's a neighborhood rich in history with at least three incarnations as an immigrant neighborhood. The neighborhood even has a link to Al Capone from its days when it was known as Little Sicily. Losing St. Boniface would erase a critical part of the neighborhood's historical fabric. (The bank Capone used was torn down long ago.) For urban planners saving the church is no less of an urgent challenge than navigating their way between downscale nail salons and upscale sushi restaurants. The battle over St. Boniface isn't simply about preserving a nice-looking church for the benefit of its former parishioners; the battle is also over how an urban neighborhood will evolve.

If you want to get involved in the preservation effort on St. Boniface's behalf, you can find more information here. You can also join the Facebook group.