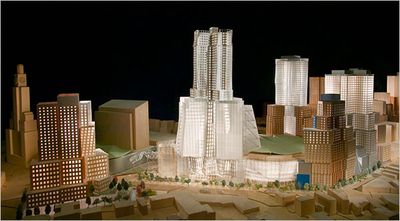 Bruce Ratner, the developer of the Atlantic Yards project in Brooklyn, has scrapped plans for a Frank Gehry-designed $1 billion glass-walled basketball arena (above) for the Nets, who will move to Brooklyn from the New Jersey Meadowlands for the 2011 season.

The continuing troubles at the Atlantic Yards are something of a mixed blessing. The project established a troublesome precedent by largely excluding government involvement in a big urban planning project. This approach meant that bigger social concerns, like housing for mixed incomes, equal access to parks and transit, and vibrant communal spaces, which were once the public’s purview, now increasingly fall to developers to address or not, as they see fit. In the case of Atlantic Yards, critics charged the project required condemning too many properties in Brooklyn, opponents have charged, and the original scope of the plan called for a cramming too many high rises into Brooklyn’s neighborhoods of low historic buildings. To assuage criticism of the massive scale of his project, Ratner lined up an impressive roster of faux-grassroots supporters such as Al Sharpton and Jay-Z. But opponents regarded the outreach as part of a sinister campaign to divide opponents, co-opting those local figures who were interested but skeptical, and creating the appearance of broad support where little existed.

Now the market has intervened where the government could not. Collapsing real estate markets have forced Ratner to delay most of the housing and a proposed office tower. Ratner still plans to start the first residential tower, which would contain a large percentage of units for low-, moderate- and middle-income families. Whether or not the reduced scale of the project assuages its critics remains to be seen.

But the market has also shattered Gehry’s glass arena in favor of a design from Ellerbe Becket, an architectural firm based in Kansas City that specializes in convention centers, stadiums and arenas. Each type of sport stadium has its own particular set of foibles. Baseball stadium design tends toward retro camouflage and cheap nostalgia. Football stadiums have become gargantuan machines for playing, part of a year-round, nonstop popular entertainment whirl in which a football game is just one option among many. The ur-form of basketball stadiums is the airplane hanger. Ellerbe Becket’s Conseco Fieldhouse in Indianapolis, where the Indiana Pacers play, is a perfect example of the form. The Brooklyn Nets stadium promises to be another airplane hanger. So much for contextualization.

One element of Gehry’s arena will remain, however. Ratner’s 20-year, $400 million deal for the arena’s naming rights with Barclays Bank is still in effect. So the Nets have escaped the bad karma of the Meadowlands only to land in Barclays Arena, named for a British bank that is keeping afloat only by virtue of a £7billion bailout by Qatar and its royal family, a deal denounced by Liberal Democrat treasury spokesman Vince Cable as “a scandal of mammoth proportions.”