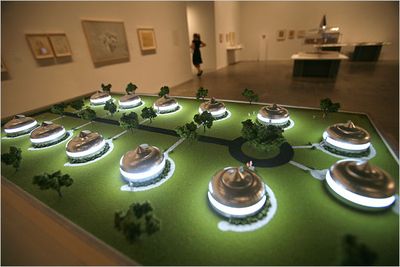 Walking through the “Buckminster Fuller: Starting With the
Universe” exhibit at the Museum of Contemporary Art in Chicago, I paused before
a monitor playing a grainy film of Fuller speaking to a group of college
students some time during the 1960s. He looked, and talked, like an IBM
engineer on peyote. I wonder what his audience made of Fuller. He was speaking
about how the education system trammels the mind, a very au courant topic, but
his volubility was driven by his undying love for the radio he operated in
World War I. The campus talk was a
portentous moment: the last prophet of technological utopia speaking to the
last vanguard of unfettered humanism.

Fuller started his career as a loopy visionary and canny
businessman with a scheme to cover the globe with 4D Lightful Towers, which
were glass and steel towers serviced by zeppelins. He wanted to place them
everywhere, including the poles. The scheme was as audacious in its conception
as it was crude in its design. In the 1920s Fuller had not yet developed his
considerable skills as a designer. The 4D Lightful Towers—the wordplay hinted
at his love of language—were the template for every major plan he ever devised.
He never lost his fascination with the idea of stuffing people into hives.

Fuller refined his vision of a phalanstère throughout his
long career. The most enduring product of his Fourierian labors was the geodesic
dome, most commonly applied to the design of a piece of playground equipment
beloved by a generation of grade school children, including me. As his design
skills developed he came up with increasingly more intriguing vehicle designs,
the coolest of which was his Aerodynamic Dymaxion car, a cross between a
Volkswagen van and a B-29 bomber that Fuller designed to accompany his Dymaxion
house (above).

Like all prophets, Fuller was not a modest man. “I am
convinced that human knowledge by others of what this book has to say is
essential to human survival,” he declares in the foreword to his book Critical
Path. His brand of technological messianism fell out of favor by the 1960s only
to be revived and transformed in the current decade through our mania for green technologies.

By now we know we’re probably going to have to give up on our desire for a
flying car; it’s too polluting. Late in his life Fuller, ever prescient, seemed
to realize this, so he built himself a catamaran version of a scull. An actual
Fuller scull is on display in the final room of the “Buckminster Fuller: Starting With the Universe” exhibit.
Everyone focuses on the Montreal Biosphère when remembering Fuller, but, to my mind, this scull is a
better way to understand the future as Fuller conceived of it: rowing along a
smooth river in an over-engineered yet elegant craft, at one with nature.