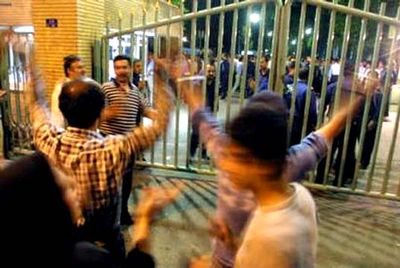 “Everybody try to film as much as poss today on mobiles –
v\imptnt – these are eyes of world,” the Twitter feed persiankiwi declared
today. This dramatic call for video and still photographic footage of the
events unfolding in Tehran after the disputed June 12 national election is, on
one level, a challenge to the government’s control of the media. On another
level, though, the call is a challenge to the entire aesthetic regime of the
post-revolutionary Iranian cinema, in particular, the government program to
enforce the “commandments for looking” (ahkam-i nigah kardan).

, after the dust settled from the 1979 revolution, the government
initiated a program to “purify” its citizens’ senses after years of steady
poisoning by Western media during the Shah’s reign. The most noticeable effect
of the government’s attempt to purify the national sensorium was to create a
cinema of the veil based upon a “modest and averted gaze.” By imposing a strict
Shiite prohibition against the desiring gaze, Mottahedeh says, the government
hoped to bind the nation to the “imaginal world of the Shiite imams” (emphasis
in original). In other words, a purified cinema would transmit meaning not
through a direct depiction of events, or through seamless special effects, but
through what was not visible on screen.

As a result, post-revolutionary Iranian cinema assumed the
clerics’ preoccupation with otherworldliness, whether it took the form of the
ninth-century Imam Husayn’s escape to the land of no-where (Na-koja-Adbad) or
the famous 1978 telephone call from the Ayatollah Kafi of Mashhad to the same
Imam Husayn, urging him to leave Karbala after 1,100 years and take up the
cause against the Shah in Iran. This phone conversation was recorded on
cassette tape and distributed to Iranians across the globe.

The director Bahram Bayza’i works squarely within this
otherworldly strain of Iranian cultural practice. His 1992 film The Travelers
opens with a woman directly addressing her audience, informing them that she is
about to travel by car to her home by the Caspian Sea. She calmly adds, “We
shall all die.” And sure enough, later in the film the family is wiped out.
Shot in a documentary-style talking head shot, the opening scene is a voice
from the dead. 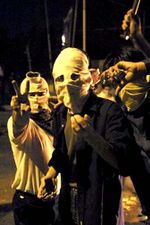 Otherworldliness of a more perplexing kind pervades the work
of Abbas Kiarostami. His films usually feature a Kiarostami surrogate figure, a
Tehranian sophisticate bearing witness to another’s struggles with quotidian
Iranian life. In both Life and Nothing More and The Wind Will Carry Us this
figure travels to the countryside to a place from which he signals, implicitly or
explicitly, his existential distance. A darling of
Western critics and film festivals, Kiarostami has been denounced by film
critics in his own country as an “identity dealer” trafficking in images of
rustic Iranians for hard currency. In this view Kiarostami’s outsiders offer a voyeuristic
glimpse into the post-revolutionary real, acting as a camera obscura for the
polluting Western gaze.

Kiarostami’s critics—they’re not all government
lackeys—object to the way he looks at Iranian life. If post-revolutionary
Iranian cinema examines the country with an explicitly mediated gaze,
Kiarostami interposes an otherworldliness that doesn’t conform to Shiite
orthodoxy. Kiarostami’s otherworldliness is the same as the students and
protesters in the streets of Tehran with their mobile phones. It is the
otherworldliness of Cannes and YouTube and Twitter. Mir Hussein Moussavi’s supporters
are taking out their cellphones, not to place a call to a medieval imam, but to
present an unaverted gaze on political unrest for the world outside Iran.