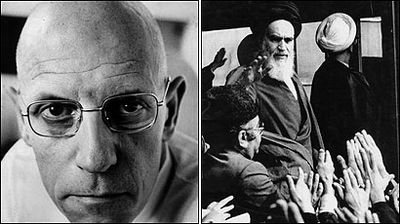 With no abatement in the anti-government fury now gripping Iran, it’s worth recalling Michel Foucault’s remarks on the 1978-79 Iranian revolution, which toppled the Shah. In a career full of provocative statements, Foucault’s most notorious stance was his enthusiastic endorsement what he called the “rapture” (ivresse) of the rebellion that killed thousands of Iranian civilians and left the country in the grip of a repressive theocratic order.

I haven’t heard anyone describe the current uprising as rapturous, but there’s certainly been some degree of romanticization of the role of the Internet in fomenting rebellion in the IRI. It’s easy to imagine that the thunderous voice of Iranian rebellion is a Tweet, but that’s mostly because Twitter is virtually the only source of news from the streets of Tehran.  Iranians themselves are much more likely to communicate through cellphone text messages.

In his infamous Le Monde column from May of 1979, Foucault was actually discussing two Iranian revolutions, not one. “Does the horror of the second condemn the rapture of the first?” he asked. The first revolution resembled the one we’re seeing now, except much more brutal and violent. Foucault had been sent to Iran by the Italian newspaper Corriere della Sera shortly after the “Black Friday” massacre of 4,000 people on September 8, 1978.  Foucault functioned as a journalist interviewing representatives from the Shah’s army, important figures in the opposition, and even American government officials in Tehran. He witnessed the street demonstrations, which were rapidly growing in size and intensity at that time. He reported on the strains of anti-Semiticism and xenophobia emerging in the protests. He claimed that the street protesters were fighting not only the Shah, but also “global hegemony,” the array of external influences and strictures governing daily life for Iranians.

If the Twitter dispatches from the IRI indicate anything, it’s that the current protests aren’t xenophobic. No one seems concerned with global hegemony at the moment. Like the 1978 protesters, today’s Iranian rebels simply want their daily lives to change. So far, however, the government has not cracked down with the severity of the Shah’s forces. It was the trauma of 4,000 dead in one day that sparked the religious—and rapturous—element to the battle against the Shah. Religious fervor propelled the opposition past their fear of death.  For Foucault, the heady early days of the Iranian revolution proved that there was no limit to the desire for human freedom.

The first stage of the Iranian revolution was the political limit-experience Foucault had been searching for his entire career. Alas, it was the last one. By the time Foucault wrote his Le Monde article, the ayatollahs were firmly in charge and beginning their own violent repression. The late 1970s were a depressing time for oppositional politics. On the day Foucault’s article appeared the front page of Le Monde carried the headline, Is It Useless to Revolt? Liberal French intellectuals had gone from embracing a principled Marxist opposition to finding common cause with absurd Moaist ultra-leftists after May 1968, before finally giving tepid support to the naked stupidities of the Baader-Meinhof Gang and the Red Brigades. For a brief time during the fall of 1978 the Iranian uprising seemed like an oppositional politics one could believe in. People were risking their lives just so they could live according to their own beliefs.

Daily life was the primary political battleground for Foucault, and it was here that the 1979 Iranian revolution failed, as he recognized. In this sense the stakes are the same today. In the US we have some valid interests in seeing political change in Iran. After all, Iran is a state spinning its way to a nuclear bomb. But there’s also a sense of American triumphalism in the commentary here: Iranians chose the ayatollahs while we chose the Internet, and now we’re winning. It’s worth keeping in mind what Foucault would say is really at stake in Tehran right now: not the freedom to use Twitter, but the very possibility of risking everything to become more of what one is.