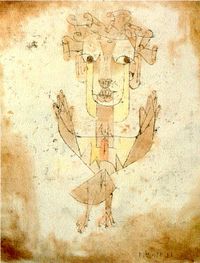 Today in the Huffington Post Bernard Henri-Lévy waxes poetically, perhaps too poetically, on the situation in Iran. His basic point is that Iran will never be the same no matter how the current turmoil is resolved. He describes the uprising, in terms reminiscent of Foucault’s remarks about the 1978-79 Iranian revolution, as “a miracle,” which was

endowed under this circumstance with the blind mimetism and
un-self-consciousness that is peculiar to the Angel of History when it
thinks it is going forward, but is actually looking backward–will seem
to have reproduced topsy-turvy the very scene in the same streets,
surrounding the same barracks and the same shops, that was described
thirty years ago by Michel Foucault, who never imagined that the real
revolution was still to come, and that it would be the exact opposite
of what he described.

Henri-Lévy’s invocation of the Angel of History derives, there can be no doubt, from Walter Benjamin, but not quite accurately. Benjamin interpreted Paul Klee’s painting Angelus Novus (1920) as a symbol of progress, not history per se. Looking backward toward the past, where “a chain of events appears to us,” Benjamin writes, “he sees a single catastrophe which relentlessly piles wreckage upon wreckage, and hurls them before his feet.” The Angelus Novus is propelled forward by the storm from paradise, which “drives him irresistibly into the future to which his back is turned, while the pile of debris before him grows toward the sky. That which we call progress is this storm.”

Henri-Lévy invokes Benjamin in the hope that the present uprising in Iran won’t repeat an earlier–and unsuccessful, from a Western, liberal point of view–revolution that Foucault regarded as a radical break from previous revolutionary practice, at least for a moment. However, when he remarked upon the Angel of History, Benjamin was looking back at a long series of failed revolutions in France–1830, 1848, 1854, 1870–in which street protests succeeded only to usher in a new order that was just as repressive and unjust as the one it replaced. Will the revolutionary fervor of the uprising in Iran end up being just another piece of wreckage of the feet of the Angel of History? Will it end up just like the first one–simply replace one repressive order with another?

As reports of nighttime street battles across Tehran, a la the July Revolution, filter in, the Iranian Twitter feed wonders aloud, “the only question now is how will the end happen – peacefully or with civil war.” As the Angel of History might say, either way, it still might not end.