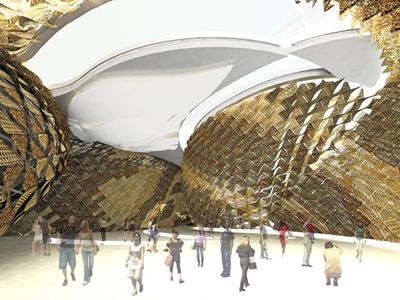 The latest issue of the online journal MAS Context is out. Some online journals have a very irregular publication schedule, but editor Iker Gil and his staff have produced their second issue less than three months after their first one.

The theme of the second issue is Events, with an emphasis on global events. In fact, the first feature maps the distribution of international events (Olympics, world expositions, World Cup finals, etc.) and reveals that virtually all of them take place in developed countries. Neither Africa nor South America have hosted a major world event, although South Africa will host the 2010 FIFA World Cup. Of course, cultural innovation percolates all over the planet, but for official, sanctioned world gatherings the developed world generally prefers to remain at home.

Speaking of world events, Mateu Baylina and Xavi Ayala interview Benedetta Tagliabue of the Barcelona design firm Miralles Tagliabue EBMT. Tagliabue is the architect for the Spanish pavilion for the Expo 2010 in Shanghai. Her task is a daunting one: to “communicate Spain” without resorting to clichés, which are the quickest means of cultural communication. Tagliabue chose ceramic and wicker (above), which she says are typically Spanish materials, for the pavilion, overcoming Chinese worries that a wicker building would blow away in a typhoon. Although the purpose of the Spanish pavilion is to express Spain’s contribution to global culture, globalization is as much a threat to Spanish culture as an enhancement to it. Tagliabue gradually erased national symbols of flamenco and carnations as the design progressed and the qualities of the materials were elaborated. The end result is a “microclimate,” neither quite Spanish nor Chinese, a distilled version of localized experience within the grand abstractions of the world exposition. Although this isn’t Tagliabue’s explicit intention, her pavilion seems to aim for a vision of what urban space will like after the idea of the nation has passed.

Contrasting with Tagliabue’s measured optimism about the Expo 2010 is Chicago architect Doug Garofalo’s mournful pessimism about Chicago’s 2016 Olympic bid. Commissioned to help design two high-profile venues, the Aquatics Center and the tennis stadium, Garofalo is caught between the city’s tradition of no-nonsense pragmatism and its “make no small plans” design traditions. Just as the design process for the Olympics proposal was taking off, city officials stepped in and declared, “Well there is no more design at this point.” The proposal was ready, they felt, and the architects put down their pencils while Madrid went ahead and starting building some of its Olympic venues.

Chicago’s 2016 Olympic bid, it would seem, needs Bruce Mau. He is the Creative Director of the Denver Biennial of the Americas. His specialty is taking a good idea and making it into much larger, more ambitious idea. The purpose of the biennial is to sustain and elaborate the positive vibe of the 2008 DNC into a collective and sustained visualization of the possible. Mau is collecting people and groups trying to improve the world around them, from a couple of American teenagers who created a website Taking It Global to a group called !GuateAmala! which is dedicated to creating a positive culture in their homeland. The biennial itself, entitled In Good We Trust, will exhibit the possibilities for massive change across seven subject areas, including health, technology, energy, and education.

Another biennial is in the works. Sharon Haar and Iker Gil have proposed a Chicago Design Festival, starting in 2011. Doug Garofalo mentioned that Chicago architects haven’t come together on a set of unified design principals for the 2016 Olympics. (Tokyo did it by essentially assigning all design tasks to Tadao Ando.)  Haar and Gil want to rectify the lack of cooperation and communication within the city’s dynamic design community by creating “a permanent design network that pushes the design community in Chicago.”