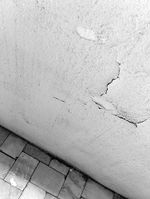 After appearing to buckle under the vicious crackdown by the government, dissidents in Tehran are trying to revive the protests. One front on the war against the government is the walls of Tehran. Security forces have been frantically clearing walls of anti-government graffiti. But Tehran Bureau reports, “Persistent street artists have already scribbled ‘honk your horns!’ on
the fresh white canvases, hoping to revive the rebellious cacophony of
evenings past.”

The battle over Tehran’s walls is a metaphor for the struggle to control Iran’s post-election reality. Blaming the US and the UK for the protests is an effective strategy because, as Tehran Bureau puts it, “it is easier to convince a population raised on paranoia and
government-vetted news to believe that they are under attack from the
outside than it is to allow open debate on important social and
political changes occurring on the inside.”

Meanwhile, in the West, there’s a debate about how Iran has shaped journalism’s post-print reality.