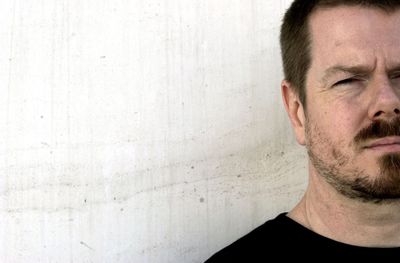 Last night, after a wine tasting at The Bottle Shop, the store’s manager Joe Alter and I drove to the Hideout to hear the DKV Trio. Together for ten years now, the Trio consists of Kent Kessler on bass, Hamid Drake on drums, and Ken Vandermark on sax. All three musicians are fixtures on the Chicago jazz and avant-garde music scene. Vandermark, you may recall, was the subject of Daniel Kraus’s documentary Musician

Vandermark works with ensembles as large as 11 and as small as two. Five seems to be about right for him; the Vandermark 5, for which Kessler plays bass, is Vandermark’s best-known group. His music can be densely layered to the point of being overwhelming at times, especially when Vandermark is in full flight. Thus the trio format is a good introduction to the basic elements of Vandermark’s music. He combines the rhythmic drive of Dave Holland with the hyper bebop of Eric Dolphy. Another point of comparison is the trumpeter Dave Douglas, for whom jazz is like the novel: a heteroglossic medium weaving together voices from a variety of different musical forms, from swing to rock to funk to hip hop. Douglas and Vandermark have both completed interesting cinema projects: Douglas took it upon himself to provide music

Vandermark once played in a group call Mr. Passion, and that still describes his style of playing. Last night the first set lasted about 45 minutes, but consisted of only two songs. Vandermark kicked things off with a Coltranesque fury, with Kessler and Drake treading water, waiting their turn. This apparently formless run of squawks was actually a thematic introduction to Vandermark the musician. Every moment he played he was going to go all out, but in a more disciplined way than the late Coltrane–in other words, like Dolphy would have played. Kessler and Drake each had a role to play, too. Kessler and Vandermark clearly feel very comfortable with each other, with the bassist alternately pushing and pulling the sax player, adding heft to Vandermark’s frenetic runs, then withdrawing notes to bring Vandermark back down to earth again.

If Kessler added depth to the DKV Trio, Drake added breadth. The drummer switched deftly between musical idioms, leading the ensemble through its eclectic sources. I’ve never seen a drummer change sticks so frequently, although at one point his juggling got away from him and he knocked a cymbol to the floor. It was Drake who ensured that the songs maintained their balance and that the musical ideas, which could get esoteric, resolved themselves into recognizable forms.

The first set–neither Joe nor I had the stamina for the second set–may have only been two songs, but they covered a lot of ground. At the end of the set Vandermark withdrew to a corner of the room, at once spent and charged up, which is exactly how jazz is supposed to leave you feeling. It was how I felt leaving the Hideout.

The DKV Trio performs tonight at the Sugar Maple in Milwaukee.