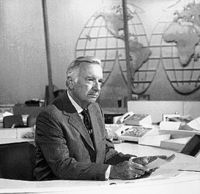 Walter Cronkite is
dead at 92, which seems old, but not quite old enough. Who is to say what’s an
appropriate lifespan? How much more life is available to someone at 92? For
someone who reported on a national loss of innocence but represented a hope for the best, one always
wishes more life.

Personally? I was
too young to remember him as a newscaster. He represents the loss of something,
the so-called greatest generation’s orientation to history, that I couldn’t
experience myself. Cronkite existed in an imaginary realm inaccessible to my
generation, but for which he was the avuncular spokesman. He spoke from a world that saw the triumph over global evil in grainy black and white. It would have been
nice to hear some dispatches from that place. Anything other than the symptom, the messy ambiguity of the last forty
years, from which we can’t escape.

Then again, what I
would have liked to have heard from him is a direct denunciation of the media’s
failure to see through the rush to war in Iraq or the evisceration of the
Constitution in the name of preventing
another terrorist attack. Cronkite’s most famous moment was his grave
announcement that the Vietnam War was a lost cause, but he never reported that
Iraq was one from the beginning. He never stepped forward and said to his fellow reporters, in his sonorous voice, “You know something’s wrong. Stand up and say so!” I don’t
think that was too much to ask from the most trusted man in America.