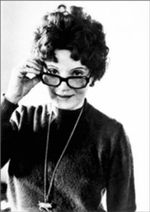 It’s been made into a major motion picture and it’s listed
in 1001 Books You Must Read Before You Die, but when I purchased my copy of Cold
Comfort Farm (1932), the bookstore clerk was befuddled. “Look at that cow on
the cover!” Why isn’t Stella Gibbons’s novel better known?

I don’t know if the cow on the cover was Aimless, Feckless,
Pointless, or Worthless, the four cows at Cold Comfort Farm who are tended by a
garden gnome of a man named Adam. He’s one of the Starkadders, inhabitants of a
Sussex farm whose way of life has remained the same since before the Norman
invasions. Digging a new well is the first capital improvement in centuries,
but the project keeps getting delayed because the Starkadder men playfully
throw each other into its depths. The family matriarch Ada Doom keeps the Starkadders
imprisoned in their Iron Age squalor because she fears being left alone on the
farm, where, as a child, she witnessed “something nasty in the woodshed.”

Into this benighted world steps Flora Poste, newly liberated
from school and her parents, who have recently died. Flora brings little more
than a teapot and a fresh change of clothes with her, but to the Starkadders,
it’s like Louis XIV had moved in. Immediately
upon wakening on her first day at the farm she resolves to improve the poor
Starkadders’ lives. She begins modestly enough by buying Adam a small mop with
which to clean the dishes. He’s so awed by the mop, which is evidently the most
advanced piece of technology he’s ever seen, that he hangs it like a talisman
over the sink, then continues to clean dishes as he has for eighty years—by scraping
them with a twig.

Undaunted by this mixed success, Flora sets about improving
the lives of the other Starkadders. Her next project is Elfine, a seventeen-year-old
wood nymph in love with Dick Hawk-Monitor, the son of the local gentry, a class
of people “who speak once every twenty minutes.” Flora sets a copy of Vogue
magazine in front of the girl and her life is changed forever. Ada Doom’s
sixty-year obsession with the wood shed is undone by nine hours of Flora speaking
sense to her. A doomsday-preaching uncle is dispatched to Chicago. The brooding,
Lawrencian eldest son is whisked away to Hollywood. By the conclusion of the
novel so many people are getting married that the ceremonies happen at the rate
of two a day.

The transformations occur with the haste and totality one
finds only in farce, of which Cold Comfort Farm is a prime example. Gibbons
wrote the novel as a parody of a genre now lost to us, the rural novel. The
genre was wildly popular in Britain in the 1920s and 30s and, like most
products of idealized English life, inspired both ridicule and longing. Gibbons’s
writing is tartly comic throughout, but it’s interesting that Gibbons took the trouble
to invent rustic terms like “rennet-post” and “sukebind.”  Ostensibly the imagined vocabulary is meant to
convey the depths of the Starkadders’ isolation, but Gibbons’s neo-rustic language
also invokes the pleasures of the pastoral tradition, itself a largely urban
invention.

With her London dresses and familiarity with telephones,
Flora is supposed to be thoroughly modern, but her literary lineage runs back
to pastoral comedies of the Jacobean and Restoration theaters. These comedies
staged conflicts over land and money in the form of narratives about love and
marriage. In these plays there was often a meddlesome character named Wellborn
or Overreach intent upon improving the lives of the tenant farmers toiling on
the land. The self-appointed reformer generally succeeded but had to be
dismissed from the stage before the end. The ultimate victors in these
conflicts were the middle classes with their privatized interests determined in
the family home rather than the courts of London.  It’s significant, in view of this tradition,
that Cold Comfort Farm ultimately becomes the sole proprietorship of Rueben,
the most bourgeois of the Starkadders.

At the conclusion of the novel, Flora boards an airplane and
returns to London, her duties as Mistress Overreach fulfilled. Gibbons mocks
the rural novel genre of her time through tart comic language and the invocation
of the morality of improvement, which dates back to the English Civil War.
Ironically, Gibbons’s most enduring literary triumph depended on a tradition as
old as the Starkadders themselves.