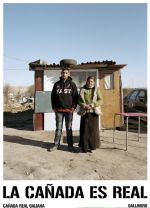 La Cañada Real is home to 40,000 people and is believed to be Europe’s largest “informal settlement.” It’s located 20 minutes outside Madrid. Originally founded 40 years ago by Moroccans, gypsies and migrants from the Spanish countryside, it’s still home to a mix of Catholics, Muslims, and drug addicts. Neither a squatters’ camp nor an official municipality, La Cañada was made possible by a 700-year-old royal decree that established a network of livestock paths hundreds of miles long. The result is perhaps the oddest extra-urban development: the settlement is 79 yards across and nearly nine miles long.

This thread of improvised urbanism has no schools, nurseries or health clinics. Large portions of the settlement lack running water or a working sewage system. Most of the housing stock is substandard, although there are some elaborate villas cobbled together somehow. Public transportation into Madrid was halted a while ago after drug addicts began using the buses to commute to their dealers. A local priest estimates that La Cañada hosts 12,000 drug deals every day, supplying practically all of the heroin, cocaine and other narcotics for Madrid.

Once an alley of misery located well beyond the purview of the city, La Cañada has developed into a full-fledged dispositif as the city expands to meet the settlement. Local officials have vowed to demolish the worst parts of La Cañada and fix up the rest, although exact plans haven’t been announced, so no knows for sure who can stay and who will be kicked out. Where the displaced people will go is anyone’s guess. Even in the best of times Spain’s social support network allowed half a million poor Spanish families to live without any income from any legal source, public or private. With the Spanish economy among the hardest hit in Europe by the global recession, the displaced residents of La Cañada will have to find another crack in Europe to hide in.

Image above of a young couple in La Cañada Real from Abitare magazine.