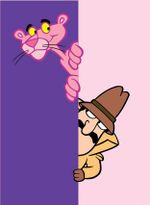 My son is nearly five years old, and for him nothing is more funny than the sight of someone falling down. So the other night we rented Blake Edwards’ original 1963 version of The Pink Panther. It was a shock to revisit the film. I must have seen it at one point, but clearly I didn’t remember much of it. I realized pretty quickly that the film wasn’t appropriate for a young child, so I sent my son to bed and watched the rest.

I’ve always thought of the Pink Panther series–including the 2006 remake with Steve Martin–as little more than a long sequence of pratfalls and sight gags. And the series is certainly that. But it started off as a sex farce, albeit one with a fairly intense fear of sex. I’ve always assumed Inspector Clouseau is a bumbling idiot because he’s a parody of the all-knowing detective in the mystery genre, or because he’s French, but that’s not the case. Instead, he’s clumsy and inept because he’s a cuckold. His wife Simone is carrying on an affair with Sir Charles Lytton, who has stolen the Pink Panther jewel. She also must resist the advances of Lytton’s nephew, played by Robert Wagner, who seems to have used up all his youthful energy in this one film. Inspector Clouseau’s pratfalls are about not looking, about not seeing the illicit desire around him. His maladroit actions are a kind of symptom, his body telling him he doesn’t belong in the adult world. And yet he solves the crime as blindly as desire itself.

This way of seeing, or not seeing, carries over to the film as a whole. The one scene in which Clouseau joins his wife in bed the camera refuses to pan over, remaining fixed on an open window, a sly but oddly embarrassing reference to the voyeurism to come.(The film was made after the production code ceased to be in effect, so Edwards could have shown them in bed together if he really wanted to.) The most sexually explicit scene occurs between Lytton and an Indian princess, played by Claudia Cardinale, who doesn’t bother hiding her French accent. The couple embraces awkwardly on a tiger skin rug, the dead tiger’s face leering back at us. This has to be one of the most sexually anxious scenes in 1960s American cinema.

It’s been observed that the great silent era comedians like Harry Langdon, Harold Lloyd, Buster Keaton, and Charlie Chaplin often played sexual naifs. Peter Sellers’ Inspector Clouseau fits neatly into that tradition. But there’s another lesson here as well, at least for me: Even the most familiar film images can sometimes have a strange and unexpected origin.