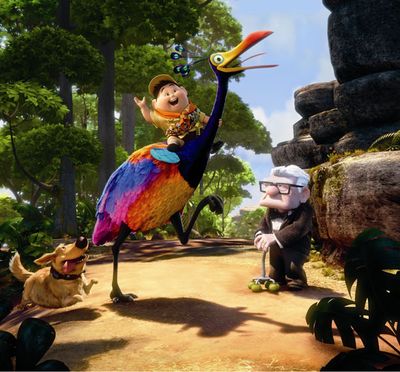 Yesterday saw perhaps the most perfect weather so far in
this awful summer, but my five-year-old son Ben and I were holed up in a movie
theater watching Up. The latest Pixar film has garnered almost universally
positive reviews and plenty of weepy testimonials. I was so engrossed in the
film that I neglected to notice that my son drank enough Sprite to replace all
of his bodily fluids. Up, I can report, deserves its high praise, but it’s not
quite at the level of Brad Bird’s brilliant Pixar features, The Incredibles and
Rataouille.

Up is the most melodramatic Pixar film to date, and I mean
melodramatic in the positive sense. Thomas Elsaesser defines melodrama as a
“rhythm of experience” consisting of brisk cycles alternating between
happy/sad, triumph/defeat. Even the title of the film is melodramatic: there’s
a lot of down to counterbalance the up. The movie’s maudlin backstory and
fly-by-the-seat-of-your-pants adventurousness is juxtaposed against nonsensical
humor, leaving you to constantly resort your feelings in a manner that’s
difficult to define but, to me, didn’t seem entirely emotionally realistic.

If Up has the emotional structure of an old Hollywood
melodrama, it has the referential quality of a postmodern film. All of the
Pixar films quote other films and visual texts, and Up is no exception. The
snarling Doberman with the squeaky voice is right out of Guy Ritchie’s Snatch. Carl Frederickson, the square-jawed
widower who is the hero of the film, is supposedly based on a George Booth
figure, the kind who looks like he has a mouth full of splinters. The story
premise was drawn from the same ur-story as the Indiana Jones series. The only
element drawn from real life is Dug, who represents every well-fed,
slack-minded family dog.

The Pixar
movies, Up included, are all le mode retro films. The historical details are
meticulously rendered, but it’s not always easy to define which decade they
come from or when the present action of the film takes place. Of all the Pixar films Up has the earliest reference point: the 1930s, the dawn of the
modern mass media. The Pixar films are historical dramas for people who have
yet to develop a cultural history of their own. The present is always bad, full
of unhappy homes and technologies that dull our senses. Early in Up a GPS
device, one of the few contemporary references in the film, gets tossed out a
window before it can be used in order for the real adventure to begin.

Muntz’s airship,
not Carl’s floating house, is the most intriguing symbol in Up. The blimp is an
anachronism that points not to newsreel days, but to the earliest days of
Hollywood’s current blockbuster phase. Up and its Pixar stable mates are the
only contemporary big-budget films that capture the state of wonder and
adventurousness of early blockbusters like The Poseidon Adventure (1972) and
Star Wars (1975), before special effects films became uneasily self-conscious
(see the latest Star Trek) and/or mere alteration between shock and non-shock—another
melodramatic form. Up may be a critical and popular success, but right now it
doesn’t appear to have advanced the animated feature film genre very much.
Still, Up could one day appear to be the harbinger of a new development in
big-budget Hollywood spectacles: increasingly stylized and abstract, floating
in their own self-referential worlds, flaunting their exquisite surfaces,
revealing their shriveled hearts.