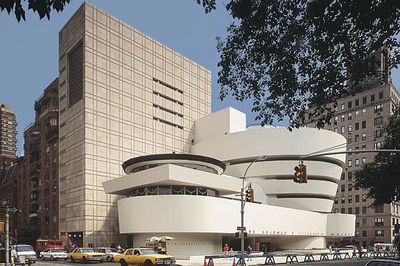 The architect Charles Gwathmey died yesterday of esophageal cancer. He was 71.

Gwathmey is perhaps best known as an architect to the stars, but he started his career as a neo-avant-gardist architect waist deep in the debates about late Modernism. He was a member of the New York Five Architects, a group of architects who started in the late 1960s to develop a design philosophy grounded in the pre-war European avant-garde. The Five–Peter Eisenman, John Hejduk, Michael Graves, Richard Meier, and Gwathmey–were all devoted to the idea of autonomous architecture at a time when European architects were looking to ground their work in specific contexts. Autonomous architecture was distinctly American in the sense that American cities lacked the typological and morphological complexities of European cities, and it made little sense to try to preserve historical continuity of architectural monuments when the American urban context was so unstable.

As a result, Gwathmey, along with Graves and Meier, looked for inspiration in Le Corbusier during his Purist phase. Graves, of course, abandoned Purism for a decorative Post-Modernism, but Meier (especially) and Gwathmey (somewhat less so) remained true to Purism. Gwathmey in particular focused on Corbusier’s villas of the 1920s as sources, elaborating Corbusier’s interest in contrasting volumes, but Gwathmey never quite matched his master’s skill at proportion. If Gwathmey ever got the proportions right, it was in his addition to Frank Lloyd Wright’s Guggenheim Museum, pictured above.

Gwathmey’s Purism was criticized by later Post-Modernists such as Robert Venturi for its overly abstract, even Utopian dimensions. The debate between the “Whites” (Gwathmey and Meier) and the “Grays”(Venturi) repeated an earlier debate between Clement Greenberg-sanctioned geometric abstract painting and Pop Art. Unfortunately, neither the Whites nor the Grays came out ahead in the debate, which tended to make both camps look like arrogant academics completely disengaged from the realities of American life.