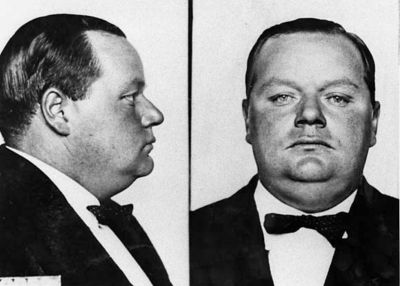 In GreenCine Daily Mick LaSalle sends birthday wishes to the Production Code, which turns 75 this summer. Actually, it’s been 75 years since the Code was strictly enforced. The Production Code was created in 1930 but not enforced for four years–a wild period, as LaSalle notes. LaSalle recounts the story of moralists campaigning against the violence, vulgar language, and sexual explicitness of the early sound films. The list of forbidden images now seems comically prudish: kisses are OK, but no tongue action; people can be shot but no blood can appear; even married couples have to sleep in separate beds. It’s important to note, however, that the campaign to clean up Hollywood films originated not with salacious content on the screen, but with the development in the early 1920s of the classical studio system and its most lucrative element, the star system.

In September 1921 an aspiring actress named Virginia Rappe died within a few days of attending a Labor Day Weekend party in the San Francisco hotel suite of Fatty Arbuckle, at that time one of Hollywood’s biggest stars and among the highest paid entertainers in the world. Attending doctors suspected Rappe had died from drinking too much. She had a history of peritonitis and the official cause of death was a ruptured bladder aggravated by alcohol. The press–still breathless over the publicity surrounding Arbuckle’s new $1 million contract, the occasion for the Labor Day party–concocted a much more lurid version: Arbuckle had raped her with a champagne bottle then crushed her beneath his great weight. William Randolph Hearst bragged that the Arbuckle scandal sold more papers than the sinking of the Lusitania. Arbuckle was tried three times for manslaughter (his mugshot appears above) before finally being acquitted in 1923 for lack of evidence.

There were other tabloid-ready incidents during Arbuckle’s second trial in 1922. A director was found murdered in his Beverly Hills apartment. Suspicion fell immediately on the two actresses with which he was conducting simultaneous affairs. Then actor Wallace Reid, who’d built his screen persona around the ideal of the clean-living American male, died of a drug overdose. All three events in 1922 were covered in lurid detail by the press, selling millions of papers and outraging Good Housekeeping, which editorialized against the morals of Hollywood. Ministers and other moralists soon joined the fray.

Worried that its out-of-control star system was attracting too much political attention (Hollywood was a vertical monopoly in those days), the studios established the Hays Office in 1922. Led by Will Hays, a corrupt Harding administration official, the office compiled a blacklist of 117 stars banished from the screen because of unfavorable publicity and issued the “Purity Code,” more widely known as the “Don’ts and Be Carefuls.” The Purity Code was updated for the sound cinema by the Production Code of 1930.

Will Hays was more than a censor, however, and his position in Hollywood revealed a dynamic that exists to this day. Hays was an effective lobbyist for the film industry in Washington, working to gain tax breaks for studios and fend off anti-trust litigation. To this day Hollywood executives continue the work of Will Hays: enforcing as much morality on screen as the market can bear, permitting as much immortality off screen as the market can bear, and cultivating as much political favor in Washington as money can buy.