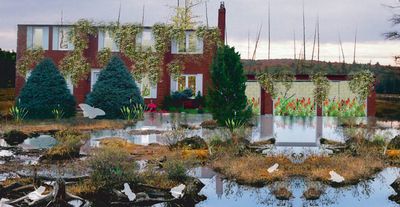 Inhabitat.com and Dwell Magazine are sponsoring ReBurbia, “a design competition dedicated to re-envisioning the suburbs.” Designers have submitted a variety of proposals to re-purpose all the vacant McMansions and Linens and Things cluttering up the post-real estate boom suburbs. Judges picked the finalists, and readers can vote for the winner through August 17.

Now that we regard the suburbs as an ontological and environmental dead end, it’s fitting that some of the designs refer back to the heroic era of the suburb. Alexandros Tsolakis and Irene Shamma want to establish a network of airship docking stations linking suburbs and city centers. Buckminster Fuller had the same idea 80 years ago. So did the post-war British group Archigram, who were influenced by Fuller and his ideal of a lightweight,
high-tech infrastructure. Similarly, Adil Azhiyev and Ivan Kudryavtsev have proposed what they call a “T-trees social housing project.” Their proposal is an updating of 1950s Metabolist schemes, particularly Noriaki Kurokawa’s capsule tower in Tokyo.

Several proposals address vacant big box stores, one of the most nettlesome problems of suburban planning. Forrest Fulton wants to convert stores into a cross between urban plot gardens and a Whole Foods store. Alan Berger and Case Brown move further down the food chain, using big box stores to grow algae to feed cattle. Instead of fields of green, Evan Collins sees container homes. Ha Young Ihn’s EX BOX scheme hasn’t attracted many votes yet, but it’s the closest to how big box stores are actually being re-purposed into multi-functional community centers. The most common means to re-use big box stores–that is, when anyone bothers to reuse them because it’s cheaper to simply tear them down–is to convert them into megachurches.

My favorite proposal is Joseph De Le Ree’s elegant idea for mounting windmills on highway signage; it seems the most practical solution in the bunch. Special mention should go to Calvin Chiu’s plan to turn all the algae-choked swimming pools into biofilter water treatment plants. Essentially Chiu wants to turn McMansions into huge planters, with the backyard pools looking very much like the mucky mosquito-breeding grounds they already are. Here the suburb has come full circle, with subdivisions returning to a state of nature.