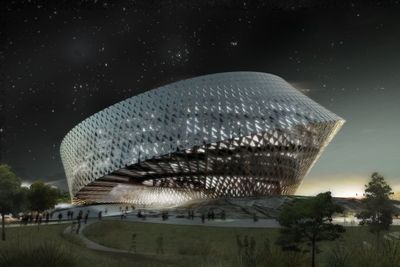 Arch Daily reports that the Danish firm BIG was awarded first prize on an open international design competition for Kazakhstan’s new National Library in Astana. The building’s Möbius Strip design is clearly indebted to the Books Spiral in Rem Koolhaas’s Seattle Central Library, as well as BIG’s own design for the Danish pavilion at the 2010 Shanghai Expo. The new library will be named after the President of the Republic of Kazakhstan, Nursultan Nazarbayev, who has been accused of overseeing one of the most nepotistic, ruthless and corrupt regimes in central Asia.

Bjarke Ingels, one of the project architects, explains the design this way:

The circle, the rotunda, the arch and the yurt are merged into the form of a Moebius strip. The clarity of the circle, the courtyard of the rotunda, the gateway of the arch and the soft silhouette of the yurt are combined to create a new national monument appearing local and universal, contemporary and timeless, unique and archetypal at the same time.

A new national monument is probably not what Kazakhstan needs right now. Higher on the nation’s wish list are a transparent government (the nation is 124th, or perilously close to the bottom, on Transparency International’s list of countries by corruption) and a functioning democracy (the Organization for Security and Cooperation in Europe, a democracy and human rights group, has never found a Kazakh election to be free and fair). In 2007 Nazarbayev granted himself the right to run for office as many times as he likes. When he no longer feels like ruling the country, he will turn over power to his eldest daughter Dariga, an opera singing mezzo soprano.

Kazakhstan is a highly bureaucratized police state sitting on the largest oil find in the world since the discovery of Prudhoe Bay off Alaska. Until 1997 the national capital was Almaty, which, the government claimed, no longer offered enough room for expansion, perhaps because the city is ringed with the graves of people killed by government death squads.

So Nazarbayev moved the capital from Almaty, near where most of the people live, to Astana, out in the frozen steppes. Nazarbayev is something of an architecture fan, and he’s been busily spending his nation’s oil wealth to spruce up Astana, the world’s second-coldest national capital. BIG’s new National Library is actually the latest in a long list of national monuments on the Kazakh steppes. Norman Foster has designed several high-profile buildings for Astana, including the Palace of Peace and Reconciliation, a pyramid which houses, among other things, something called a “university of civilization.” Foster also designed the Khan Shatyry Entertainment Centre, a sort of giant glass yurt set upon the highest point in the capital. The Khan Shatyry is due to be completed some time this year.

Until Khan Shatyry and BIG’s Nazarbayev National Library are completed, the centerpiece of the new capital will remain the Bayterek tower, designed in the timeless neo-fascist style. If you ever visit Astana, head immediately to the Bayterek so you can press your hand into Nazarbayev’s golden hand print—don’t forget to take your gloves off first—and make a wish. Your wish will be granted, provided you’ve wished to hear the Kazakh national anthem yet again, because that’s what will happen. Afterwards, bribe a government official to tell you where to find Astana’s best place for beshbarmak, the national dish of boiled horsemeat and noodles.

Cap off the evening by voting to rename the capital Nursultan, after the president. Nazarbayev was too bashful to allow Astana to be named after him when it was first proposed in 2008, but no doubt he could be persuaded to change his mind by an outpouring of national affection along the lines of the 2005 national election, when 91% who voted to re-elect him president for life.