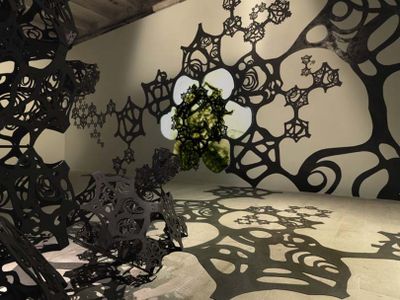 There’s an old adage in architecture: A sculptor can make a square wheel, but an architect has to make the wheel round. Elizabeth Cline finds some designers who want to create square-wheeled buildings while visiting the Thyssen-Bornemisza Art Contemporary in Vienna on assignment for Seed Magazine. The exhibition “Transitory Objects” features the works of Alisa Andrasek, Matthew Ritchie, François Roche, and Neri Oxman. They create designs at the intersection of art, science, and architecture. According to Cline, these designers “split deeply from the finite, permanent, and utilitarian tradition of architecture” by imagining structures “arguably better suited to the constantly morphing, impermanent, and aesthetically driven needs and desires of modern society.” These designers use ideas from quantum physics and multiverse theory, forging objects based on computational models and algorithms.

Ritchie derives his ideas from cosmologists Paul Steinhardt and Neil Turok’s cyclic universe theory combined with language theory (which one Cline neglects to mention). His objects are cosmo-metabolist modular structures meant to eventually become interchangeable parts in a building [at top is his Assembly of 27 generation 3, 39 generation 4, and 56 generation 5 modules (from The Evening Line), 2008]. Roche uses biological metaphors, imagining an urban environment as a coral reef. Oxman starts her inquiry with actual building materials, then extrapolates structures that, in Cline’s words, would “react to their environment.”

Oxman’s objects relate to nature in much the same way as jugenstil, which represented art’s second attempt to come to terms with nature. (Realism was the first.) In fact, her artworks–like all of the objects in the exhibition, they’re structural only in the most abstract sense–closely resemble jugenstil. Maybe that’s why they were chosen to appear in a Viennese art gallery.

In any case, looking at Oxman’s leafy abstractions or Ritchie’s snowflake amalgamations one starts to wonder if the issue isn’t the originality of these schemes, or the practicality of their designs, or the wisdom of reducing people who use buildings to so many jumpy subatomic particles. Rather, at issue is the Thyssen-Bornemisza objects’ artistic value. Cline insists that the “Transitory Objects” exhibition objects “are art in ways that architecture perhaps has never been before—if we accept that art is partly defined as an object able to stand alone and whose meaning or purpose is open to infinite interpretation.”

What if someone interprets a building designed like a coral reef as an excellent place to hang ugly curtains? All designs are open-ended in the sense that once they’re put into use, they tend to take on a life of their own, and they generally head in an aesthetically dubious direction. Take, for instance, the generic city, a municipality that expands everywhere all at once according to its own algorithms of narrow economic interests. As Rem Koolhass writes, the generic city is “at its most subversive, its most ideological” when “it elevates mediocrity to a higher level.” As for the architecture of the constantly morphing city, Koolhaas warns, “Close your eyes and imagine an explosion of beige.”

Is the problem that architects are too rooted in a specific place, too deterministic? Or is the problem that we don’t really like it when artistic forms change because they become less artistic? Actually creating a building from the designs exhibited at “Transitory Objects” will be less of a challenge than convincing people that should give up their preferences for designs that endure in a world of constant change.