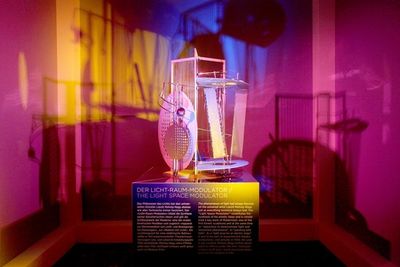 The Bauhaus has become a brand and a shorthand for a German minimalist Modernism. It’s even a typeface, designed well after the Bauhaus closed its doors for good. But a much more complex and varied image of the Bauhaus emerges in three exhibits commemorating the 90th anniversary of its founding. First of all, the Bauhaus had three locations, and each one is staging its own exhibition: the ­Bauhaus-Archiv Berlin, the Stiftung Bauhaus Dessau and the Klassik Stiftung Weimar. The Bauhaus was less of a place than a constantly evolving state of mind. Walter Gropius founded it in 1919 as a cross between a mystics’ retreat and a trade school. It later became a training ground for a number of artists, designers, and architects who were central to European Modernism but whose works don’t resemble the tubular minimalism most commonly associated with the Bauhaus. László Moholy-Nagy’s Light-Space Modulator (above) has elements of Cubism and Dada, but what makes the work representative of Bauhaus is that it’s an exploration of the intersection between art and technology. If the Bauhaus had a single credo, that would be it.