So if the shopping mall is dying—not a foregone conclusion, but the signs are not good—what will disappear with it? According to Walter Benjamin, we would lose the very origin of modern Western consumer culture itself. The first covered shopping malls in the world were the Paris arcades, or passages couverts. They are located on the Right Bank, roughly between the Bourse and the Paris Opera in the Second Arrondissement. Only about 20 of the original 150 arcades still exist. Most of them were constructed in the 1820s and ’30s. The Passage des Panoramas was the first passage to be constructed, in 1800 as the Passage Mirès, and in many ways it’s the most representative. Other prominent arcades include the Passage Véro-Dodat, where in 1855 the French poet Gérard de Nerval took his last drink at what is now the Café de l’Epoque before hanging himself; the Galerie Colbert, perhaps the best preserved of the arcades; and the Passage Vivienne, where Hector Berlioz led crowds here in singing “La Marseillaise” to celebrate the revolution of the July monarchy in 1830. Many arcades have been lost, however. The Passage du Désir was demolished because of its house of prostitution. The Passage du Caire vanished along with its dominant industry, lithographic printing. The Passage du l’Opéra was torn down to make way for the Avenue de l’Opéra by Baron Georges-Eugène Haussmann, appointed by Napoleon III to remake Paris during the 1870s. 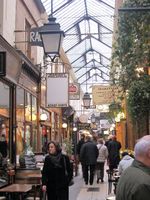 The narrow passageways of the arcades are covered in iron and glass, the first use of this form of construction. Iron and glass made possible entirely new architectural forms, including railway stations and exhibition halls. Iron construction also brought about the first schism between architects and engineers, as the latter understood the implications of the new technology long before the former did.

The introduction of iron construction is an incredibly important development to which I will return later, for it will have vast implications for architecture and public space.

Besides iron construction, the Paris arcades saw a number of firsts. They were the site of two key innovations in retailing. The arcades shops began to keep large inventories on hand and, around 1830, shop owners began placing price tags on merchandise. With haggling time eliminated and fresh inventory immediately available, these innovations improved product turnover, efficiencies that would later make possible the large department stores. 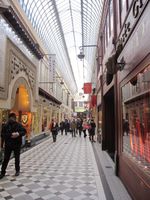 Gas lighting didn’t first appear in the Paris arcades, but the arcades first demonstrated its full potential to create an entirely artificial environment. During their heyday around the middle of the nineteenth century, the arcades were perhaps the most comfortable and democratic public spaces in Paris. Protected from the elements, safe from the hazards of vehicular and pedestrian traffic in the streets, soothed by artificial lighting, the consumers in the arcades could loiter and enjoy the pleasures of window shopping. Thus, in addition to being a new way to buy goods, the Paris arcades represented a new way of seeing.

In the confines of the Paris arcades a new social type emerged, and a new technology became a popular success. The flâneur strolled the passages, calmly gazing at the luxury goods and the fashionable crowds. Flâneurie would quickly become an essential element in the development of Modernist literature. Meanwhile, in the Passage des Panoramas, the first cinematic technology was entrancing Parisians, decades before the first movies appeared, only blocks away from the Paris arcades.