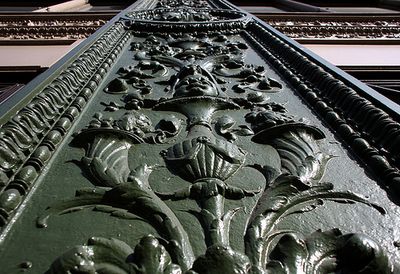 Yesterday I mentioned that the Paris arcades were the first covered shopping malls. Their narrow passageways—narrower than modern shopping malls, in fact—were covered by roofs made of iron and glass, the first use of this technique in the world. Iron was the first artificial building material and the first new building material of any kind since Roman times, but builders were slow to realize its potential.

The first arcade was built in 1800, but instead of great train sheds or skyscrapers or the new Cowboys Stadium, the iron roofs of the arcades inspired visions of ancient Greece. In 1844 the architectural theorist Carl Boetticher insisted that iron should only be used in “the Hellenic mode.” According to Walter Benjamin the architects of the early nineteenth century “failed to understand the functional nature of iron.” Consequently, “architects design supports resembling Pompeian columns, and factories that imitate residential houses, just as later the first railroad stations will assume the look of chalets.” 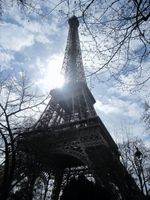 Engineers were the first to see the potential of iron construction. Their profession dated only from the late 1700s, and iron made them rivals of architects. By the time the arcades were constructed engineers and architects were attending separate schools. Engineers went to the École Polytechnique, founded in 1794, while architects attended the École des Beaux-Arts. The triumph of the engineers would reach its apogee with the Eiffel Tower, in which the plasticity of ornamental iron gives way to architectural montage. Instead of the imitation of nature or classical forms, the dynamic qualities of the Eiffel Tower come from the precise reproduction and assembly of millions of machine-made parts. Meanwhile, cast iron facades appeared in building across the US into the twentieth century.

That architects failed to grasp the revolutionary potential of iron construction wasn’t their fault. During his research in the Arcades Project Benjamin noticed that every new technology initially assumed the form of the technology it replaced. Early photography assumed the visual forms of painting. The first railroad cars were designed like stagecoaches. The first electric light bulbs were shaped like flames. An early prototype of the locomotive featured two feet that stomped up and down, like a horse. Throughout the nineteenth century the transformative potential of new technologies was obscured by mythological references and imitations of nature.

We can still see how new technologies initially assume the form of the technologies they are destined to replace. The personal computer is still trying to extricate itself from the typewriter. The utopian potential of computing remains unrealized, yet we stubbornly hope that it will liberate us. The iPhone perfectly illustrates this conundrum. It resembles neither a PC nor a cell phone, and it’s become an intensely personal device. One can loan out an iPod but not an iPhone. That would be like loaning out a portion of one’s brain. Yet, the iPhone is offered exclusively (for now) by the original utility monopoly, AT&T. The iPhone represents highly personalized computing within the strictures of monopolistic capitalism.

One of Walter Benjamin’s most original, and controversial, claims concerned the problem of new technologies. I will talk more about this issue in my next post on the utopian dimension of the Paris arcades.

[The photo of the iron facade of the Woodward & Lothrop building in Washington, DC (1902) from the Flickr account of Mr T in DC. I took the Eiffel Tower photograph in March, 2009.]