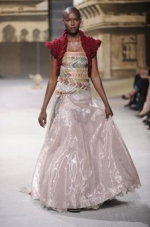 “Fashion, like architecture,” Walter Benjamin once wrote, “stands in the darkness of the lived moment.” Fashion and architecture express the unconscious of the present, offering a glimpse into a better time in the future. According to Benjamin, the utopia to come is expressed not in the new but rather in the archaic. During the 2009 London Fashion Week, which one observer described as having “the sexual charge and fashion energy that has characterized the city since the days of ‘Swinging London’ in the 1960s,” young British fashion designer Graeme Black presented “an Indian fantasy collection” (at left), complete with models in jodhpurs against a backdrop of Indian temples and jungle sounds. At a moment when unemployment in Britain is at a 14-year high, and likely to remain high for the foreseeable future, Black’s post-colonial imagery recalls a time when economic opportunity came with a sense of adventurousness, when individual and national purpose coincided.

Black’s jodhpurs shouldn’t, and didn’t, raise any eyebrows in London or in the US. After all, nearly every American shopping mall includes a store called the Banana Republic. That colonial imagery still circulates in Anglo-American culture suggests there’s a kind of collective desire at work. Benjamin called expressions of collective desire “wish images” produced by a “dreaming collective.” Wish images appears when new buildings, fashions, and technologies retain older forms, when “the new is permeated with the old.” In the wish image

the collective seeks both to overcome and to transfigure the immaturity of the social product and the inadequacies of the social organization of production.  At the same time, what emerges in these wish images is the resolute effort to distance oneself from all that is antiquated–which includes, however, the recent past.  These tendencies deflect the imagination (which is given impetus by the new) back upon the primal past.  In the dream in which each epic entertains images of its successor, the latter appears wedded to elements of primal history [Urgeschichte]–that is, to elements of the classless society.  And the experiences of such a society–as stored in the unconscious of the collective–engender, through interpenetration with what is new, the utopia that has left its traces in a thousand configurations of life, from entering edifices to passing fashions.

A prime example of a wish image is the Paris arcades. When Benjamin happened upon them in the 1920s, the arcades were derelict and neglected. Consumers had moved on, but they had left behind traces of their hopes and dreams. For Benjamin the dilapidated arcades were a material repository of the dreaming collective. I’ve already talked about how the arcades were an early image of a perfect public space in which people could feel as comfortable in the streets as they could at home. An 1852 travel guide to Paris called the arcades “a world in miniature.” The utopian philosopher Charles Fourier regarded the arcades as the physical form of the phalanstery.

During the nineteenth century the arcades “radiated through the Paris of the Empire like fairy grottoes,” Benjamin wrote. The arcades were not just simply a collection of shops; they were a landscape of dreams. Exotic goods were shipped in from around the world and displayed with the care paid to religious icons. For the first time the sheer display value of commercial goods was as important as their use. The arcades were the center of what Balzac called Paris’ “great poem of display” which “chants its stanzas of color from the Church of the Madeleine to the Porte Saint-Denis.”

But by the 1920s the Paris arcades were on the verge of being dead malls. Next up: what happened to the arcades.