The Paris arcades were the first international style of modern architecture, hence part of the lived experience of a worldly, metropolitan generation. By the end of the nineteenth century, arcades had become the hallmark of a modern metropolis. Glass-enclosed, sunlit bazaars appeared in Moscow, Cleveland, Istanbul, Glasgow, Berlin, Johannesburg, Naples. Buenos Aires and Melbourne.

But the heyday of the Paris arcades was brief. They peaked during the 1830s and 40s, and by 1900 the original arcades appeared to be dead malls. Their small specialty shops couldn’t complete with huge new department stores—another Parisian invention—that sold mass-produced goods at a pace rapid enough to compensate for their falling profit margins. 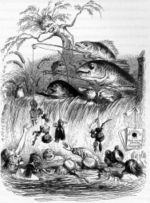 By the time Walter Benjamin wandered into them in 1924, the dilapidated arcades were like an archeological site. To him the small shops were a “primordial landscape of consumption,” their nineteenth-century customers “the last dinosaurs of Europe,” rendered extinct by the same historical forces the middle classes had themselves set into motion. Benjamin

would later track the rise and fall of the mode of consumption initiated by the arcades, a mode formerly reserved for the aristocracy. The “dreaming collective,” Benjamin discovered, confused the decline of a certain mode of shopping for the decline of the world itself.

The Paris arcades are still open for business. In recent decades Paris has made an effort to commemorate their cultural importance (most have historical markers at their entrances) and to restore them as chic shopping destinations. There’s even one shop–Stern, a stationery store—left over from the original arcades, operating in the same location since 1834. 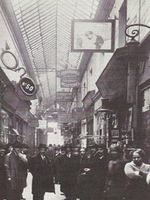 If the Paris arcades are now museums rather than archeological sites, quaint reminders of old Paris, their forms live on in every suburban galleria where you amble among a warren of upscale stores protected from the elements. The arcades’ iron and glass construction and window-shopping experience also appear in the world expositions and railway stations of the nineteenth century. Iron construction was never used for private homes, only for the homes of the restless urban masses.

In a way, then, the arcades weren’t superseded by larger and more efficient means of selling merchandise. They have reappeared in slightly altered form throughout Western consumer culture. In other words, the arcades are like fashion: recycled forms appearing as the new.

Stay tuned for more posts on fashion, the world expositions, and railway stations.