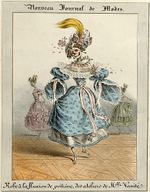 As I mentioned yesterday, the Paris arcades had a relatively brief heyday, perhaps thirty or forty years. As shopping venues, they were replaced by the large department stores. The arcades’ architectural forms were expanded by the world’s fairs and the great urban railroad stations. Their visual experiences replaced by the cinema. Their means of engagement with the urban crowds taken up by literature.

Ordinarily we would consider these developments to be consistent with normal history. Progress means that inventions are improved upon. Structures get bigger, more comfortable, more convenient. Consumer goods continually improve over time. Stories get more realistic. Spectacles become more immersive.

But what if we looked at progress in these realms in a different way–not as progress, as moving forward, but as repetition. What if each new iteration of something–the arcades to the department stores to the shopping malls, for instance–represented not an improvement, but another attempt to address the same needs, the same social demands. Each new development, from this perspective, would look like a return to the past. There would be an implicit sense of failure accompanying every new development.

To get a better sense of what I’m getting at here, consider the way we think about fashion. We’re often deeply ambivalent about it. Fashion is new and exciting, a chance to shed old styles and old identities. It’s also hemlines up, hemlines down, then back up again. Padded shoulders are here one year, gone the next, then back again ten years later.

As Roland Barthes pointed out in The Fashion System, fashion doesn’t just dictate a given set of details as fashionable; it also consigns other qualities as unfashionable, as banished (temporarily) or forbidden (more or less permanently, like the slit sleeves of medieval France). Yet when unfashionable details return to fashion, become visible again, we experience their return as novelty rather than recurrence. As Walter Benjamin remarked, “Fashions are the medicament that is to compensate for the fateful effects of forgetting on a collective scale.” The pattern of continual forgetting and constant novelty provide the illusion that the world is changing. In fact, fashion the human capacity for change is deflected into the object world. Meanwhile, fashionable people dress for eternal youth. Fashion arrests biological and social change, while introducing constant change in consumer choices. Nature is dead; only the thing world lives.

According to Benjamin, this is how we experience progress: repetition and forgetting on the subjective side, constant novelty and increased monumentality on the objective side. Progress, Benjamin declared, was an ideology, “the chief narcotic of the nineteenth century.” His own aim in researching the Paris arcades was to “drive out any trace of ‘development’ from the image of history.” Thus, the dwelling places of the masses—from the great department stores to the world exhibitions to railway stations to airports and sports stadiums—are really just the eternal return of the Paris arcades.