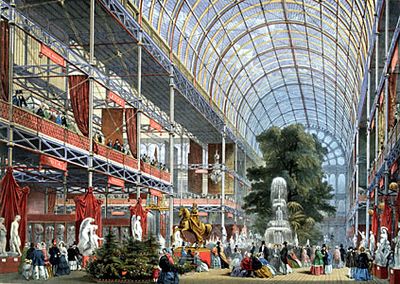 After the department stores, the most immediate successor to the Paris arcades were the world exhibitions. The first world exhibition took place in London in 1851. The centerpiece of the fair was the Crystal Palace, designed by the Duke of Devonshire’s gardener, Joseph Paxton. The Crystal Palace was basically a giant greenhouse constructed in the same manner as the Paris arcades.  When the public learned that the massive scale of the structure would require the destruction of a row of ancient elm trees in Hyde Park, Paxton simply threw the iron and glass structure over the elm trees. Horace Walpole described the Hyde Park elms in the Crystal Palace as “looking almost like the lions of the forest caught in a net of glass.” Others described the Crystal Palace as “incomparably fairylike.”

Skeptics charged that such a huge edifice couldn’t be constructed out of iron and glass, so the Crystal Palace represented a triumph over the engineering limits of the time. The Crystal Palace also proved that metal and glass were proper building materials for public buildings. Like the Paris arcades before it, the Crystal Palace was a world in miniature, encompassing both nature and culture, the finest in manufactured goods and their raw materials, all under the same roof. On a much larger scale than the intimate arcades, the London world exhibition was a plausible vision of a world remade by humans and their industrial might.  On a concrete, massive scale, the 1851 Crystal Palace exhibition represented the forthcoming universe of plenty.

The 1851 exhibition was so successful that the French had to stage one as soon as they could gather enough iron and glass.  “Europe is off to view the merchandise,” the French philosopher Ernest Renan sighed at the opening of the Exposition Universelle des produits de l’Agriculture, de l’Industrie et des Beaux-Arts de Paris 1855. Paris also hosted world exhibitions in 1867, 1889, and 1990. Most of the structures were temporary, including a massive exhibition hall for the 1867 that one witness described as looking “as if there were before you a monument built on another planet, Jupiter or Saturn.” A few structures are still standing, including, most famously, the Eiffel Tower, built for the 1889 world exhibition. The architectural historian Sigfried Giedion described the world expositions as Gesamtkunstwerke, or total works of art, because of their phantasmagoric blends of technology and art, military displays and fashion shows, business and pleasure.

Walter Benjamin described the world exhibitions as the “folk festivals” of capitalism. They were the origins of the entertainment industry in that, for the first time, mass spectacles became big business. Each exhibition was grander and more spectacular than the previous one. While the original 1851 exhibition was a purely commercial affair, subsequent exhibitions were more explicitly about national progress. By the 1900 Paris exposition the line between commercial success and national glory was completely blurred. National pavilions became commonplace, a tradition carried on to this day with the “International Participants’ Pavilions” for the 2010 Shanghai Expo. Once again, displays of national progress are mixed with industrial might in China’s most affluent city.

Contemporary world exhibitions, like their nineteenth-century precursors, are nationalist displays that don’t really address individual fantasies. They parade goods before mass audiences with a passive, look-but-don’t-touch ethos. The exhibitions were designed to overwhelm the individual, to place him or her in a new world space in which a single city (London, Paris, Shanghai) absorbs all other nations, including its own. The exhibitions are the height of nationalism even as they drain all essences from culturally-specific lived experiences.