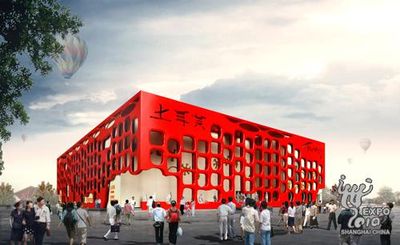 Since their beginning, the world exhibitions have been about national progress on display. They are phantasmagorias promising social progress without revolution through the peaceful development of technology and industrial capacity. World exhibitions are the daydreams nations have about themselves. Despite its flashy technology and high style, the Shanghai Expo 2010 fits squarely within this tradition.

The Turkish pavilion in Shanghai presents an odd narrative, a maze of dreams. The story begins with Turkey as “The Cradle of Civilization,” a title to which the nation doesn’t have exclusive claim. The Turkish claim to be the origin of civilization is an archeological dig at Çatalhöyük, the site of a large Neolithic village. The nation of Turkey could have begun at any number of points, including Atatürk’s dissolution of the Ottoman Caliphate, but the exhibition organizers chose a dense collection of mud huts beside a vanished river. After the establishment of the first settlement, the Turkish nation emerged through a series of infrastructure projects, such as the first man-made dam and the highways and water systems of Istanbul. The final section of the pavilion is a return to the future exhibit in which the mythological symbol of the phoenix represents the nation’s future as reborn out of the ashes of the present.

The nation as hut theme is even more pronounced in the Malaysian pavilion. The nation will be represented by a single hut built out of palm oil and recycled plastic. The 3,000-square-meter hut will be the symbolic home of Malaysia’s 47 ethnic groups living under the banner, “One Malaysia — City Harmonious Living.” Interestingly, construction on the Malaysian pavilion began only days after Malaysia established diplomatic relations with China. Presenting an image of peace and unity to obscure international friction is a theme that goes back to the first world exhibition. The king of Prussia wouldn’t allow any of the royal family to travel to London for the 1851 Crystal Palace exhibition, although his minister of war was allowed to go. The trip was profitable: After visiting a Krupps armaments display, the Prussian minister of war placed an order for 200 cast-steel cannons.

China, the host nation for the Shanghai Expo 2010, is preparing for another major celebration besides its world exhibition. In preparation for the 60th anniversary of the Communist Revolution, the National Ballet of China is rehearsing The Red Detachment of Women ballet and paramilitary policemen are practicing mass formations the outskirts of Beijing. Meanwhile, in Shanghai, the government is all business. The Shanghai Corporate Pavilion is an updating of Renzo Piano and Richard Rogers’ Centre Pompidou in Paris. Instead of art, however, the Chinese pavilion, designed by Atelier Feichang Jianzhu, will house displays of Chinese technological prowess. According to the architects, the Corporate Pavilion will be a “dream of a brighter future, through sophisticated technologies.” The future of China rests in technology, which is “about the enrichment of imagination and symbolic of the industry and industrialism of Shanghai.”

While China dreams of a future of blinking LED lights and giant water misting systems, Spain wants to etch itself in the unconsciousnesses of its citizens, like Freud’s wunderblock. The Spanish pavilion’s architect, Benedetta Tagliabue of Miralles Tagliabue EMBT, tells MAS Context that she wanted to avoid the “clichés” of Spain national identity. “The strongest symbols, such as flamenco and carnations, begin to disappear. I think those are things that remain in subliminal levels,” Tagliabue explains. She concedes that “you have to work with the clichés, because you have to, you have to be able to recognize the country from far but in our case they are subliminal, not physical.” Turkey, Malasia and China are presenting themselves as dreamscapes, and so is Spain. However, Spain will present itself as a particular kind of dream: a movie. “In the end the exhibitions are like cinemas. You always try to have some type of transparency, create the illusion of being inside, outside,” Tagliabue says. Her pavilion, which is made of wicker, will convey a national identity as an experience conveying “the idea of dynamism, the patios, the transparency between exterior and interior.” In other words, the Spanish pavilion will be like a Pedro Almodóvar film: offering up its visual splendor all at once, yet dredging up a past that’s deeply encoded.

The Spanish pavilion offers a national identity that is neither primitivist nor aggressively technological. With its Pier One architecture, the Spanish pavilion is arguably the most modern of the national visions I’ve discussed here. It isn’t an imperial spectacle like China’s pavilion, nor a post-colonial fantasia like Turkey’s or Malaysia’s. Instead, the Miralles Tagliabue EMBT pavilion is like a novel or a film, a transmissible experience.