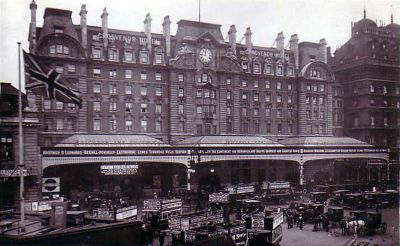 Continuing my posts on the prehistory of the shopping mall, which seems to be turning into a series, I would like to return again to the idea of progress, in particular Walter Benjamin’s critique of progress in the Arcades Project. For Benjamin, progress is one-sided, if not utterly illusionary. As I read his critique, progress is split into two realms: technological and social progress. In modernity these realms are asynchronous, with technological progress well ahead of social progress.

The asynchronous nature of progress is most noticeable in architecture, literature, and the cinema. I will return with examples from literature (Hemingway, to start) and film (the 1920s French avant-garde and Berlin, Symphony of a Great City, among other examples), but I’d like to continue looking at architecture.

Railroads were among the most conspicuous forms of technological progress in the nineteenth century. National progress appeared to be expressed both in the massive effort of building a national railway system and the speed at which trained traveled. The Saint-Simonian Michel Chevalier declared in 1852, “One can compare the zeal and the ardor displayed by the civilized nations of today in their establishment of railroads with that which, several centuries ago, went into the building of cathedrals.” In his 1861 travelogue entitled La Vie en chemin de fer (Life on the Railways) Benjamin Gastineau claimed that railroads animated nature. “Before the creation of the railroads, nature did not yet pulsate; it was a Sleeping Beauty.”

The great railway stations of the nineteenth century became the new city gates, much as airports now serve as entry points to entire nations. (Imagine what a foreign traveler would think of the United States if all he saw of it was JKF airport.) Railroad stations were paradigmatic 19th-century objects in a couple of ways. First, their design posed a unique challenge to nineteenth-century architects in that railway stations had no models in ancient times. There were also no models from the past for skyscrapers, factories, large warehouses, and suburban houses. Building in iron, the first artificial building material, eventually became the solution, at least for the train sheds in the back. The front of many early railway stations were still cloaked in mythical garb.

The timelessness of the railway stations’ classical references obscured not only the modernity of their architectural form, but also their essentially transient, even insubstantial nature. Railroads were the origin of investments without property rights. Investors exchanged money for the fiction of a tiny, immaterial piece of real property. As structures, the railway stations were home to an urban crowd that gathered temporarily in public spaces. The urban crowds were different than the 18th-century mobs or the 20th-century masses. Orderly, individualistic and primarily middle class, the nineteenth-century urban crowds assembled but never cohered. They had neither the collective will of the mob nor the fixed identity of the masses. The urban crowd merely indulges in small change transactions and moves on.

Railroads once promised to transport people to new and exciting places. They promised a substantially different experience. Now they’ve been reduced to junk spaces peddling cheap merchandise that’s meant to be consumed immediately. Airports are no different. They, too, have become shopping malls with a parade of goods intended to distract travelers from their journeys from one no place to an identical no place at the other terminal.