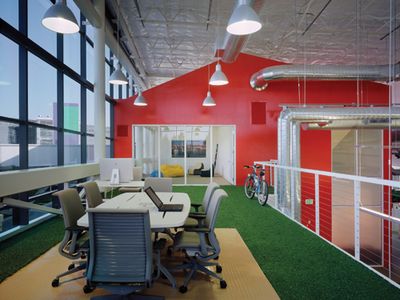 For your reading pleasure this weekend, take a look at MAS Context’s third issue, Work.

MAS Context is a journal produced by designers for designers, so there’s an outside-looking-in feel to the articles in Work. This is exemplified by Andreas Larsson’s photographs of empty offices. He’s never worked in an office, so he finds corporate offices intriguing. Over the years he’s collected images from “a spectrum of empty spaces, raw and uncluttered, waiting for work to begin.” As somebody who has worked in a traditional office space, empty offices have a much more sinister association: they’re the spaces my co-workers used to occupy before the corporation tossed them aside to improve their quarterly numbers.

Designer Liz Potokar considers how offices are occupied. She provides a brief history of office space, from the “Great Workroom” at Frank Lloyd Wright’s Johnson Wax Building built in the late 1930s to the “third place,” distributed work spaces made possible by laptops with wireless connections. Most raw processing of data is now done by computers, so it’s no longer necessary to design a work space in which people keep their heads down and process paper. As a result, collaboration is the primary value of office space.  Most recently, sustainability has become the buzzword in office design. Potokar suggests designers should embrace a “chassis-planning concept,” which refers to the ways interiors and exteriors interact.

Perhaps the ultimate “third space” is the street. Maria Moreno-Carranco visits Santa Fe, a “megaproject” on the outskirts of Mexico City. It’s a standard-issue office/mall/planned community development, but generally more upscale than average Mexicans can afford. However, working class Mexicans have carved out a place in the strictly controlled public space of Santa Fe.  Moreno-Carranco talks to a street vendor who makes a nice living operating what amounts to a 7-Eleven out of her car.

David Schalliol also looks closely at built environments, in this case isolated buildings once conjoined buildings separated from their immediate neighbors. Schalliol claims these create a “tension” that demands to be resolved. These buildings are “representatives of the state of work in a community. They suggest that work is desired and offer cues about who is privileged to access it.” Small commercial buildings are low-cost, “meso-level” structures, usually on mixed commercial and residential streets. Often built by sole proprietors, the buildings can be idiosyncratic. Schalliol says we can also read the history of buildings through subsequent use and alteration, but he never offers a reading of a building himself.

Another suggestive project comes from Dean Storm. His “Wayfinding” video documents his summer internship at the Chicago firm Spirits of Space. Storm is an architecture student interested in the intersection of architecture and cinema, so he travels around Chicago with a video camera, paying particular attention to the newest structures in the city, like StudioGang’s Aqua Building and Ben Van Berkel’s Burnham Plan pavilion. As one might expect from an architecture student, Storm has an excellent eye for mise-en-scene. The relationship between film and architecture interests a lot of people, myself included, and Storm’s well-crafted video is an intriguing first look. I don’t think it’s an exaggeration to claim that all contemporary architecture is informed by reproductive technologies. In fact, Spirit of Space has a video in the issue that recalls the “city symphony” films of the 1920s in which urban experience is rendered as panorama, as spectacle.

“Work” in this issue is really about the work of designers and architects and how design influences the way people make and sell things. The view of work we get in MAS Context is something on the fringes of the standard and the routinized, as something in between. Consequently, design should balance structure and openness. In the well-designed workplace, work is the bicycle in the Google conference room from Potokar’s article: playful, sustainable, and focused on making something new.