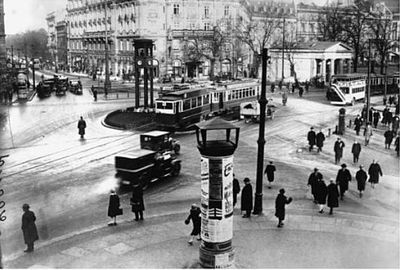 Walter Ruttmann’s Berlin, Symphony of a Great City (1927) wasn’t the first documentary film about urban experience, but it functioned as the model for all subsequent panorama films. Ruttmann’s film popularized the city symphony form, a term Ruttmann invented. City symphonies were “day in the life” documentaries of large cities accompanied by a musical score. In the case of Berlin, the film was shot by the great Karl Freund, who later served as the cinematographer on The Last Laugh (1924) and Metropolis (1927). He later won an Oscar for for Best Cinematography for The Good Earth (1937). The musical score came from Edmund Meisel, who also directed the orchestra at the film’s public opening at the Tauentzien-Palast in Berlin.

On a chilly autumn morning in 1926 we enter the German capital from the surrounding countryside on a speeding locomotive with a camera mounted on it. The sequence is at once formal, experiential, and historical: industrial development of Berlin meant that tens of thousands of workers migrated from the country to the city. If one wants to locate the film’s point of view in a particular historical subject, it would be the rural naïf experiencing the city for the first time. The outlying industrial districts function as establishing shots for the numerous images that follow of assembly lines, chugging machines, groggy laborers, and Tiller Girl revue dancers cheerfully eroticizing the churning motions of industrial machinery. Frequent shots of crowded sidewalks, cafés, and residential courtyards convey the impression of a frenetic metropolis of irrepressible kineticism. Brief outbursts of aggressiveness underline the pressures Berliners face: a man punches a horse; two children battle to hug their weary mother; a shoving match erupts on a street corner, immediately attracting a swarm of men in hats. A clearly staged sequence shows a woman throwing herself off a bridge. The modern metropolis is driving people crazy, Ruttmann suggests, but, as frequent references to traffic cops and soldiers remind us, the city remains a smoothly running machine.

Ruttmann presents a geographical and social panorama of the city. He leaps swiftly from rich to poor, from man to machine and back again, from the grandeur of the cityscape to the sewers beneath, and always movement, movement in every way that can be found. Secreted around the city, sometimes hidden in a suitcase, Freund’s camera takes in everything: Trains, trams, horses, bustling crowds, spinning wheels and fairground rides, boat races, horse races, dog races, couples making out in a park.

Ruttmann creates his panorama through associative montage which, unlike the explicitly political aims of Sergei Eisenstein, confirms total exchangeability and eternal recurrence as the foundation of modern mass culture. Ruttmann ignores the nineteenth-century monuments of imperial Berlin. Rather, the German capital is no longer a procession of great buildings. Now it is the blur of traffic. No one sets foot in a church, but Berliners crowd into stadiums and nightclubs. Workers can barely keep up with the rapid pace of machines; they only slow down to look at manikins in shop windows. Ruttmann edits to associate faceless workers to industrial machines to the seductive lure of commodities on display, then closing the circle with a shot of a man picking up a prostitute.

Berlin, Symphony of a Great City was immediately influential, even before its release. When he learned of Ruttmann’s project, the Brazilian artist Alberto Cavalcanti completed his own version of the city symphony film, Rien que les heures (1926), a film about Paris.  Dziga Vertov was influenced by Ruttmann during the production of the much more famous Man with a Movie Camera. Panorama films, with their panoptic gaze and insistent structuring of urban experience, continued to be made long after the city symphony vogue ran its course. Godfrey Reggio’s Koyaanisqatsi (1982), with music composed by Philip Glass, is perhaps the most direct descendant of Berlin in the contemporary cinema, with Jules Dassin’s Naked City (1948) serving as the link between the urban documentaries and fiction films.