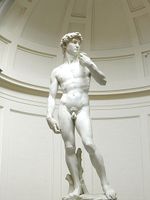 I’ve been talking about one origin of cinema from the Paris arcades. To continue that line of thought I’d like to consider Walter Benjamin’s “The Work of Art in the Age of Mechanical Reproduction” (1936), perhaps his best-known and most enduring work. The Artwork essay is one of the foundational works of film theory. Its contribution to cultural studies is immense. John Berger’s seminal Ways of Seeing

is directly indebted to Benjamin’s essay.

Benjamin traces the history of art, which for him is not only a means of creating a beautiful object, but also a means of perceiving the world. Originally works of art had a role in ritual. Beginning in the fifth century, art began to shed its cult value in favor of display value. The beautiful object continued to have a religious function until the Renaissance, when the semblance of divine perfection began to be secularized into a cult of beauty. According to Benjamin, the Renaissance was the first crisis in the history of beauty.

Whether an artwork was a representation of the divine or the perfect embodiment of the ideal of beauty, the power of a work of art resided in its uniqueness in time and space. Michelangelo’s Statue of David was originally displayed in the Piazza della Signoria, in front of the Palazzo Vecchio, the seat of secular power in Florence, so the statue’s meaning was entirely tied up in the larger glory of the Florentine city-state.

We now know Michelangelo’s David through its endless reproductions, but in the sixteenth century the statue retained its aura, which Benjamin defined as “the unique phenomenon of distance, however close it may be.” Anyone who visits the Galleria dell’Accademia in Florence, where the David now resides, can see how the statue retains some of its auratic power. Even though it’s one of the most familiar objects in Western art, the experience of viewing the actual statue is nevertheless enchanting, evident in the hushed mobs circle it respectfully.

But seeing the David in a crowded museum isn’t the same as seeing it in a Renaissance piazza. Much of the attraction of the statue is that it’s the original of a series of copies. Artworks have always been inserted into different contexts with entirely new interpretations, and it’s always been possible to copy an artwork. However, the invention of photography in the nineteenth century introduced a form of reproducibility that, for the most part, destroyed the auratic properties of art.

The nineteenth century saw the second great crisis in beauty. For the first time, it was possible to make a more or less perfect copy of an artwork and distribute it on a mass scale. It was no longer necessary to travel the world to see great artworks. They were suddenly everywhere and available to anyone. During this time there were attempts to turn paintings and sculptures in mass viewing experiences in the manner of the world exhibitions and the proto-cinematic technologies like the panoramas, but the attempts failed. In reaction to the decline of aura the l’art pour l’art movement created a theology of art. “Pure” art denied any social function for art, or any categories. Photography itself initially tried to emulate art’s old cult value. Earliest photographs concentrated on the face, which fed the cult of remembrance. Aura has its last stand in the photographed face, Benjamin declared.

No one, Walter Benjamin included, would claim that seeing a photograph of the David is exactly the same experience as seeing it in person. To get the full impact of Claude Monet’s 42-foot-long Water Lilies, it’s necessary to travel to MoMA. But in a world of ubiquitous images we no longer really stand before an artwork to contemplate it. We take it in, then move on. The Rothko Chapel only underlines how far the contemplative value of art has fallen; it’s necessary to construct a special building to filter out the noise of other images.

Mechanical reproducibility means that art is now appreciated in a distracted manner. The same may be said for our entire environment. As a result of the rise of mechanical reproduction, the seminal art form of the twentieth century was an art based entirely on distracted viewing: the cinema. More on that in my next post.