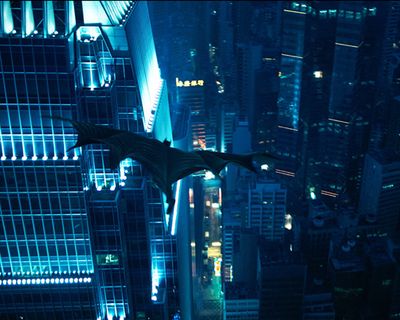 Generally when you hear people referring to Walter Benjamin’s “The Work of Art in the Age of Mechanical Reproduction” essay, they talk about how the mass reproduction of artworks allows them to be placed into different contexts, thereby changing their meaning. This isn’t a bad summary of the Artwork essay, but there’s a lot more to it than that. Benjamin’s main subject in the essay is the cinema.

As I discussed in my previous entry, Benjamin argued that mechanical reproduction destroyed the aura of artworks. Aura lies in the perception of distance, that a work of art is somehow mysterious and remote. Reproduction literally and figuratively brings art closer to the masses. Because a reproduction doesn’t carry with it the sense of being in the presence of artistic genius, and because of the sheer wealth of images in the mass media, no one really contemplates a work of art anymore.  One pages through a book about Florentine art of the Renaissance, but the experience is nothing like seeing the Mona Lisa in the context for which it was originally created.

Reproduction disperses the image to the masses, who absorb it in a distracted manner, as one of a number of images. Benjamin noted–remember, he was writing in 1936, before the society of the spectacle was fully in place–that the masses have come to prefer an artificial reality to the real one. It’s now commonplace to argue that we can no longer distinguish between the real and the artificial because of the sheer wealth of images in contemporary culture. However, Benjamin differs from this line of argumentation in that he claimed that the preference for images over reality came from the distracted manner in which people in modern societies take in their world. Reproduction has created a new sensibility, the desire “to pry an object from its shell,” which is the mark of a perception that sees “the universal equality of things.”

Virtually since their inception, the movies have been denounced as mere entertainment for people who simply want to be distracted. Contemplation and the ability to make fine distinctions are reserved for elite tastes. Benjamin counters this opposition by asserting that film opened up a whole new way of perceiving reality (I’ll expand upon this point in my next post). He also claimed that moviegoers identify with the camera, making their point of view that of a critic. Popular cinema is crafted to make everyone who sees it an instant expert. The masses may react negatively to Picasso, but they love Charlie Chaplin because he fuses visual and emotional pleasure for an audience that’s an expert in the cinema. The lower the social significance of an art form, the more an audience can mix criticism and enjoyment.

This isn’t to say that movies don’t have their retrograde aspects as well. Whenever people try to argue film is an art form, Benjamin points out, they ascribe ritual qualities to it. One example is the entire phenomenon of the cult film, which developed in parallel with the concept of the cinephile. Auteur theory has left us with a pantheon of film geniuses, from Howard Hawks to Martin Scorcese.  Hollywood studios compensate for the cheap reproducibility of their product by creating a cult around the movie star, “the phony spell of a commodity” as Benjamin puts it.

Since Benjamin’s day movies themselves have succumbed to the universal equality of things. Watching a movie in a darkened theater uninterrupted from beginning to end is becoming increasingly rare. Movies are now everywhere, packaged with additional features on Blu-Ray disks and vying for disk space with MP3 files on an iPod. We watch movies in a distracted state, watching a movie and, at the same time, something else as well.

Movies have adjusted themselves accordingly, dispensing with distinctions large and small. The title character of The Dark Knight constantly struggles to remain in the foreground of the image as the settings alternate abruptly between a gleaming post-industrial metropolis and a grimy, ink-strained industrial city. His opponent is both maniacally focused and a bundle of tics and neuroses. Batman loses the fight against the criminal underworld and the overwhelming phenomenon of the city itself, eventually disappearing into the murky, confused world in which he lives. At the conclusion of the film, it’s as if Batman had never existed. Guy Ritchie’s RocknRolla is a compendium of tough-guy gestures grafted onto a plot that threatens to lapse into incoherence. There are no good guys or bad guys in the film because we know the genre so well we can dispense with such crude distinctions. All we really want is tough guy poses, and that’s all we get, one after the other, immediately and all the time.

Stay tuned for more on the Artwork essay.