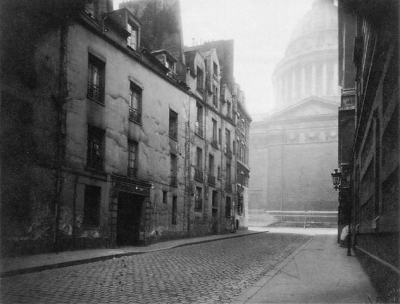 As I mentioned in my last post, it’s commonplace to argue that at some point in history–maybe when MTV debuted–we lost the ability to tell the difference between the image and the world, between the real and the artificial. Writing in the 1930s, Walter Benjamin was working with an older opposition, one derived from György Lukács, between first nature (our helplessness before the uncontrollable fury of thunderstorms) and second nature (our helplessness before the uncontrollable fury of the global economy). Benjamin was also highly influenced by Surrealism, which, like Lukács’ theory of reification, asserted our view of reality is clouded by a faulty rationality. We don’t prefer the artificial to the real because we’re simpletons duped by the irresistible lure of the image, but because we’ve reshaped our reality so totally and so perfectly that we no longer recognize it as our own.

This is why Benjamin admired the work of the early 20th-century photographer Eugène Atget, a favorite of the Surrealists as well. Atget wasn’t naive, but he saw himself as a tradesman making a living photographing ordinary street scenes in Paris. Oftentimes his photographs had no people in them, a motif that fascinated Benjamin and the Surrealists. (That’s Atget’s “Coin de la Rue Valette et Pantheon” [1925] above.) Before Atget, the human face and body were the primary subject matter of photography. Atget banished people from photography and with them the last vestiges of cult value in the medium. His photographs of a deserted Paris were like the scenes of a crime, Benjamin noticed. Atget’s photographs provided no ground for contemplation. They were signposts, but without direction. The everyday objects of ordinary experience were revealed as strange and unsettling. In this way photographs acquired the first traces of political significance, that all was not as it appeared at first glance. To control meaning, captions became necessary for the first time. As Benjamin put it in “Little History of Photography” (1931), Atget “looked for what was unremarked, a forgotten, cast adrift.  And thus such pictures . . . work against the exotic, romantically sonorous names of the cities; they suck the aura out of reality like water from a sinking ship.”

Later, in “The Work of Art in the Age of Mechanical Reproduction” (1936) Benjamin made a similar but more sweeping claim about the cinema. A different nature presents itself to the movie camera than to the naked eye. Instead of being something we enter into unconsciously or vaguely, in film we enter nature analytically. While a painter lovely caresses the surfaces of nature, the cameraman chucks a piece of dynamite at it, then reassembles the pieces:

Our taverns and our metropolitan streets, our offices and furnished rooms, our railroad stations and our factories appeared to have us locked up hopelessly. Then came the film and burst this prison-world asunder by the dynamite of the tenth of a second, so that now, in the midst of its far-clung ruins and debris, we calmly and adventurously go traveling.

A movie camera can be mounted on a speeding locomotive, dropped down a sewer, or secreted in a valise and carried surreptitiously around a city.  The camera reveals aspects of reality that register in our senses but never quite get processed consciously. Film changed how we view the least significant minutiae of reality just as surely as Freud’s Psychopathology of Everyday Life changed how we look at incidental phenomenon like slips of the tongue. In other words, film serves as an optical unconscious. Benjamin asserts the film camera “introduces us to unconscious optics as does psychoanalysis to unconscious impulses.”

In Benjamin’s lifetime photographic and cinematographic technologies improved dramatically, thus widening the spectrum of visual experience that can be caught on film. The idea that improved technology can expand our sense perception and make the unconscious visible continues today. Digital video has improved to the point at which an entire television series can be devoted to the filming of ghosts.

Perhaps one day we’ll have a revelatory film made from an iPod Nano video camera. More likely, though, we’ll continue to get snippets of little kids doing allegedly cute things and locker-room peep shows. In either case, the result will probably get dumped into YouTube and forgotten. For all his bold assertions about the potential of rapidly evolving photographic technology, Benjamin equivocates at the conclusion of his Artwork essay. Film presents a whole new world to the masses, but the masses aren’t necessarily paying attention. “The public is an examiner,” he writes, “but an absent-minded one.”