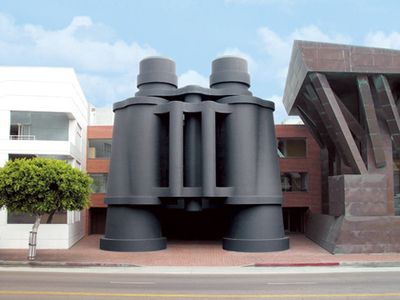 There are a number of concepts in Walter Benjamin’s “The Work of Art in the Age of Mechanical Reproduction,” but the two most important are distraction as a mode of reception and the mechanical reproduction of artworks. Architecture, as we have seen, is experienced in a state of distraction. But what about architecture and reproducibility? Benjamin has much to say about the relationship between art and photography, but what about the relationship between photography and architecture?

We have many photographs of the exteriors of nineteenth-century buildings, but relatively few images from their interiors, especially the interiors of middle-class homes. One reason may have something to do with the trace, Benjamin’s term for the impression left on objects by human activity.  “If you enter a bourgeois room of the 1880s,” Benjamin explains,

for all the coziness it radiates, the strongest impression you receive from it may well be, “You’ve got no business here.” And in fact you have no business in that room, for there is no spot on which the owner has not left his mark–the ornaments on the mantelpiece, the monogrammed antimacassars on the armchairs, the transparencies in the windows, the screen in front of the fire.

The inhabitant’s marks on the objects of a room are traces, residues of a life. This is why whenever something breaks, we get angry because a trace has been lost forever.

It’s not that traces can’t be captured by photography. Rather, in order to create a reproducible image, one that would be of interest to the public, it is necessary to eliminate all traces of particular individual’s daily life.

Modernist architecture views the trace the same way as photography does. Benjamin writes, “This is what has now been achieved by the new architects, with their glass and steel: they have created rooms in which it is hard to leave traces.” Benjamin declares that the “new” architecture—i.e., Modernist architecture, a term he never uses—will “transform humanity utterly.” By this he means that Modernist architecture will make bourgeois life more transparent, less inward-looking—in short, more politically engaged. The Paris arcades were an exemplary space in this regard because they were public spaces that were as comfortable as private ones. The arcades were the family room turned inside out.

However, after World War II the “new” architecture became the International Style, which became international because the style lent itself to being photographed. A new kind of photographer appeared during this time: the architectural photographer. The box cameras they used generally used black and white stock, the perfect vehicle for International Style buildings, with their boxy, unornamented shapes and translucent facades. Furthermore, Modernist buildings were unified images, with all traces of past use strictly eliminated. 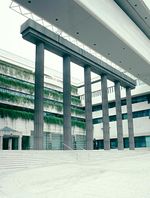 Later, color photography popularized Post-Modernist architecture, with its colorful bricolages of past styles. Architectural elements became so many images to be manipulated to fit into a larger whole, ready to be photographed for later use in marketing materials. The Greek column, for instance, lost its ritual value as an element in a temple, and has become a decorative feature to be strewn about a building anywhere an architect pleases. Arthur Erickson even dispensed with the column’s structural function in his Canadian Embassy in Washington, DC (1989; at left).

Since World War II architecture has increasingly de-emphasized functional and symbolic values. Large commercial and public buildings are now designed primarily to be photographed. Like actresses in Hollywood films, they are always ready to be seen by the camera. They don’t great people with “welcome” anymore. Now they ask, “How do I look?” Buildings and artworks are the only objects still commonly made by human hands, and yet both have been profoundly shaped by the technologies of mechanical reproduction.