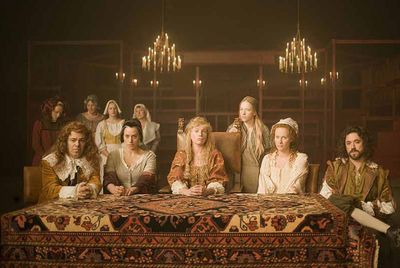 At the end of every week my family has “Fun Friday,” an evening of pizza, popcorn, and movies. My kids are age two and five, so the movies are invariably animated and the pizza cheese only. (I make a pizza with grownup toppings for my wife and me.) In the spirit of Fun Friday, here are some tasty items for your own Fun Friday.

, read about here.) Atterbury apprenticed at McKim, Mead & White, where he learned how to design houses as a long series of rolling bays sheltered by a deep shingled roof, a prototype of the McMansion style. He was also the architect for Forest Hills Gardens in Queens, developed as part of the Garden City movement: curving streets, green parks, compact lots, mixed housing types.

Alain de Botton has a weakness for tough-minded philosophers. He introduces La Rochefoucauld’s Maxims, the 17th-century book that gave the French their taste for philosophical reflection. La Rochefoucauld’s brand of bracing skepticism is laid out in forceful, sometimes sardonic aphorisms. He was equally unsentimental about helping others (“We all have strength enough to bear the misfortunes of others”) and falling in love (“There are some people who would never have fallen in love if they had never heard that there was such a thing”).

After abandoning the cinema for years, Peter Greenaway is back with J’Accuse, a Dan Brown-style examination of Rembrandt’s Nightwatch. (A still from the film is at top.) Greenaway argues that a murder has been committed before our eyes in the painting, and all 34 characters in the painting are suspects. If J’Accuse isn’t playing at a theater near you and you’ve never seen a Greenaway film, for your own Fun Friday watch Drowning by Numbers (1988) and/or The Cook, the Thief, His Wife & Her Lover (1989) for a good introduction to his work. But send the kids to bed first.

Half Gallery in New York City will hold an opening reception for its Ry Fyan show on Monday, October 26. Details here. (At left: Fyan’s The Reasons I Can’t…, [2009])

Guernica magazine, a terrific art and politics journal, will host a Guernica at 5! benefit on Wednesday, October 28 in Brooklyn. Among those making an appearance are Jonathan Ames, the creator of HBO’s Bored to Death, and the 3-piece band Brazilian Girls (only one woman, and no one is Brazilian, in case you were wondering). Details here.

The Center for Fine Art Photography in Fort Collins, CO will hold a Portraits Exhibition starting November 6 and ending on the 28th. The exhibit is juried by Mary Ellen Mark. Among the 2,500 images from seven different countries on display is a portrait by Whitney Yeager, a talented photographer who also happens to be my sister-in-law. Her contribution is at left.

Metropolis magazine has issued a call for entries for its 2010 Next Generation Design Competition. The theme is One Design Fix for the Future. Come up with one design for an object that will have a positive positive impact in the future and you could win $10,000.

Speaking of competitions, the Office of Metropolitan Architecture won the competition to design Rotterdam’s Stadskantoor, a multi-use municipal building in OMA’s home town. Reinier de Graaf and Rem Koolhaas designed the proposal. De Graaf says, “Rather than posing as the city’s next superlative, the design for the Stadskantoor is partly a building, partly an urban condition – a skyline in its own right.”