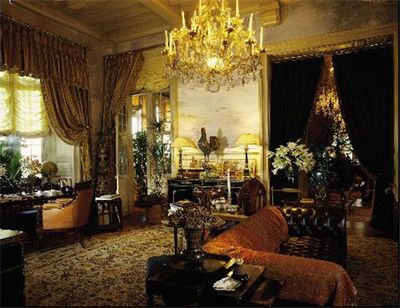 The poet Charles Baudelaire, writing in the introduction to his translation of Edgar Allan Poe’s Philosophy of Furniture (1852), asks, “Who among us, in his idle hours, has not taken a delicious pleasure in constructing for himself a model apartment, a dream house, a house of dreams?” We dream of ideal houses to this day. Thousands of magazines, books, and websites are dedicated to helping us construct dream houses. However, we have very different dreams about ideal houses than they did in Baudelaire’s and Poe’s day.

“The nineteenth century, like no other century, was addicted to dwelling,” Walter Benjamin wrote in the Arcades Project. The nineteenth century “conceived the residence as a receptacle for the person, and it encased him with all his appurtenances so deeply in the dwelling’s interior that one might be reminded of the inside of a compass case . . . embedded in deep, usually violet folds of velvet.”

But by the 1930s the idea of dwelling had changed. The 19th century’s strict divide between public and private began to break down. Instead of a place of consolation for the travails of early capitalism, by the mid-20th century the home had become a place of rational convenience as appliances gradually took over for domestic servants. In the 19th century furniture and household objects were generally simple and durable, and people formed deep attachments to them, handing them down to succeeding generations. By the 20th century mass produced furniture and domestic objects flooded the home, making it harder to form attachments to them. The home was less of a refuge than a worksite for entrapped housewives vacuuming and dusting all their stuff. At the same time, changes in home fashions rendered once cherished objects obsolete. The shag carpeting and avocado appliances in my childhood home have no meaning other than embarrassment.

My parents don’t live there anymore, and all the traces of our 15 years there have been erased. Because the house was built in 1970 rather than 1950, it hasn’t been torn down yet, but eventually it will be demolished to make way for a larger and better-equipped house, whether anyone needs one or not. Rational convenience has tipped over into something irrational. Americans have kitchens outfitted with vast expanses of granite and restaurant-quality appliances, yet we're spending less time preparing food than ever before. How many of these gleaming spaces produce anything more elaborate than microwave popcorn?

In new homes size conveys comfort, historical styles convey stability. And yet the American home is a profoundly transient place. Susan Susanka, the Minneapolis architect and co-author of The Not So Big House

book series urges us to create houses that “express the way we actually live,” which, in reality, means living as if we were going to hand our house over to someone else tomorrow. Resale value trumps all domestic comforts. Houses are not designed to be lived in by a family of four on a Tuesday in May, but for an MLS listing sometime in the future. The more affluent we are, the more likely we are to move, and the more likely we are to buy a house as if someone else is going to live there. The American home is a commodity like any other, forever ready to be passed on to its next owner. This is why every twenty-first century two-bedroom condo in every major American city has granite countertops in the kitchen: not because they’re universally appreciated for their functionality, but because they enhance resale value. Developers know this better than anybody, and it’s easy for them to ignore municipal misgivings about neo-Gothic details on a three-car garage. They’re not building homes, they’re building assets. Baudelaire wouldn't been surprised: our dream homes are still inside our heads.