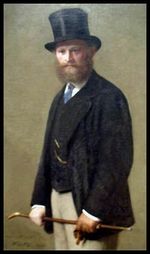 If “The Work of Art in the Age of Mechanical Reproduction” is the best known by-product of Walter Benjamin’s Arcades Project, the best known figure to emerge from his study of nineteenth-century Paris was the flâneur. The term is now used to describe someone adrift in the city, a detached observers strolling through the streets at a leisurely pace. According to a Wikipedia entry, the flâneur is a term used in architecture and city planning to describe “those who are indirectly and unintentionally affected by a particular design they experience only in passing.” In other words, people who take in their environments in a distracted manner.

This description couldn’t be further from the flâneur either as an historical figure or as a literary motif. The historical figure of the flâneur was the result of two developments in urbanism. One was the growth of the urban crowd. As early as 1798 the Parisian police fretted about the increased density of people on the streets.  A police agent reported in October of that year, “It is almost impossible to summon and maintain good moral character in a thickly massed population where each individual, unbeknownst to all the others, hides in the crowd, so to speak, and blushes before the eyes of no one.” This was the period in which the city’s traditional sins—licentiousness, deviousness, ruthless self-interest, foul odors—assume a mass and anonymous form. For the first time, the sheer size of the city was a threat to the individual. At the same time, however, the urban masses provided camouflage for the flâneur. The anonymity of the masses freed him to move about without anyone paying any undue attention to him.

The second development in urbanism leading to the rise of flâneurie was the construction of the Paris arcades in the early nineteenth century. The arcades offered a respite from the bustling crowd outside. Dandies began to frequent the fashionable arcades, taking in the sights and offering themselves up as spectacles in their own right. Around 1839, Benjamin reports, it was fashionable to walk through the arcades with a turtle on a leash in order to enforce the slow pace really determined looking required.

The flâneur walked a fine line between the teaming masses of the great industrial city and the bourgeoisie protected by its private interests. The flâneur’s ambiguous social position gave him a kind of dual vision.  For him the city is “now landscape, now room,” as Benjamin puts it, adding, “The street becomes a dwelling place for the flâneur; he is as much at home among the facades of the houses as a citizen within his four walls.” The flâneur had a keen eye for the phantasmagoria of public space, where all distinctive characteristics, all traces of unique personality, have seeped out of the individual and into the commodity. If the flâneurs were useless and nonproductive, that was because the luxury goods for sale in the Paris arcades had no use value. The flâneurs were the first to express the notion that a complete lack of utilitarian value could be a social statement. In other words, the flâneur was the first sign of the slow death of the commodity’s use value.

The Arcades Project was originally conceived as an exercise in flâneurie. In 1927 Benjamin published a review of Franz Hessel’s memoir Spazieren in Berlin entitled “The Return of the Flâneur.” Benjamin and Hessel briefly planned to collaborate on an essay about flâneurie, a dead form by that time. Flâneurie, like the Paris arcades themselves, flourished only for a brief period. The wide boulevards created by Haussmann starting in the 1870s destroyed the narrow streets that were the natural habitat of the flâneur. By then the city crowds had grown too big, urban phenomenon too overwhelming. The flâneurs lost another home when the arcades fell out of fashion. Flâneurie isn’t possible in a department store. The flâneur as an historical figure ended ignobly. According to Benjamin, “the last stand of the flâneur” was the decrepit figure wearing sandwich board advertisements.

However, as a literary motif, flâneurie had a longer and more robust existence. More on that in my next post.